How to leverage technology to improve access to education, healthcare, by Osinbajo 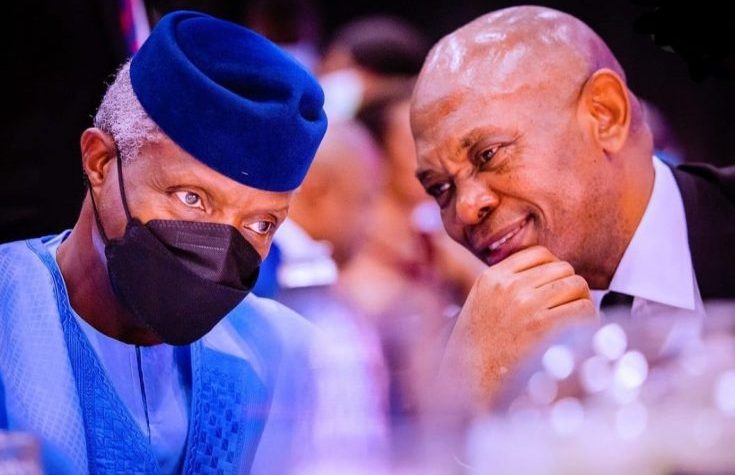 While Nigeria has experienced significant growth in the use of digital technology and number of tech companies, there is still much room for much improvement, especially on how to effectively use digital technology for mass education and healthcare.

According to him, “beyond all of the successes that we are seeing, we need to educate a large number of people, and train teachers; that’s going to be a major issue in all of this, especially in states where we have a large number of out-of-school children.”

Prof. Osinbajo noted that providing more access to education and healthcare services to a larger number of the population has to be technology driven to ensure maximum impact.

Explaining the critical role technology would play, the VP also restated Nigeria’s commitment to net-zero emissions by 2060. He stressed on the importance of transition fuels for Africa and developing countries, noting that gas, which Nigeria has in huge reserves, is an important transition fuel for the country, as well as other African countries.

Speaking on the topic, Digitization, COP26 and African Development, Prof. Osinbajo noted that digitization and climate change will determine to a large extent Africa’s growth trajectory in the next few decades, especially as digital technology offers the most effective way for Africa to fast-track development.

The VP pointed out how COVID-19 pandemic showed the resilience of Nigeria’s public healthcare system over the years, from experiences in tackling Ebola and Lassa fever.

“So we have a robust health system. But the issue is that there are just several millions of people out there in the nook and crannies. And technology must play a role; technology must play an increasing part in our abilities to be able to reach our population everywhere they may be,” he further said.

On the growth of digital technology in Nigeria and on the continent, the Vice President said: “Africa’s total inbound international internet bandwidth capacity increased by more than 50 times; the operational fibre-optic network extended by almost four times; mobile telephony, mobile cellular subscriptions more than doubled; and about 58% of the population now live in areas covered by 4G networks. Africa has over 480 million mobile money accounts, more than all other developing regions taken together.

“Over 640 tech hubs are active across the continent. Here in Nigeria, we have six unicorns, most of them fintech companies, that are valued at over a billion dollars. We are also leveraging digital technology in various ways, especially to deliver public goods and social services.”

Moving on to climate change and detailing how it affects Africa, Prof. Osinbajo, again reiterated, like he has done in several fora in the past, the importance of placing premium consideration on African needs in the transition towards achieving net-zero emissions by 2050, particularly the planned defunding of fossil fuels projects by some wealthier countries.

According to the Vice President, the issue goes beyond just climate change to the existential crisis of extreme poverty in Africa.

“The question for us in Africa is slightly different from those of wealthier countries. It is not just about climate change… for us, it is climate change as well as extreme poverty. And this is important, as that is tied to access to energy.’

“So, for an African country, Nigeria, for example, it is important for us to take into account the fact that, yes, we want net-zero carbon emissions by 2050, in our case, by 2060; but in transitioning to net-zero emissions, we have to take into account that, even today, we don’t have enough energy. Most of our population do not have access to power.

“But for most of the wealthier countries of the world, they would rather see a situation where at least public investments in fossil fuels are no longer made available. So African countries have a dilemma.

“Yes, we want net-zero emissions by 2050, but how are we going to transit from where we are and at the same time be able to provide power for our people? Our country, for example, has huge gas reserves.  We know that the transition fuel for us is gas. The only way by which you can power industries is to use gas for power.”

“The point that we have been making – those of us from African countries and the developing world, is that we refer to gas as a transition fuel. That it is important for us, not just for industries, but also to ensure that we are able to move from firewood and all sorts of pollutants in cooking. Clean cooking can only be done with LPG, which is gas. So, if we are going to transit from firewood and others, then we need LPG -gas – to be able to do so. For us, it is not just gas for industrialisation, it is also gas for clean cooking.”

The Vice President further said that the whole energy transition issue for Nigeria and many African countries is a nuance one, and should be “approached in a nuance way.”

He added, “we have to have a different pathway. If the wealthier countries are prepared to ban fossil fuels investments, they have to give us room to be able to continue to use our own fossil fuels, obviously for a much longer period; to allow access to energy for our people, and also allow us to transit to cleaner fuel.”

Prof. Osinbajo further disclosed that Nigeria has since developed an energy transition plan on how to transit to net-zero emissions by 2060.

He also expressed optimism that despite the bleak forecast on some African economies, and the impact of the COVID-19 on it, the future is bright; adding that the continent would witness some significant growth and take advantage of the opportunities, especially as economies recover from the effects of the pandemic.

The event was hosted by the UBA Group Chairman, Mr. Tony Elumelu, and was attended by some members of the National Assembly, members of the Diplomatic Corps, among other dignitaries from both within and outside Nigeria.