How South South can make impact in Nigeria’s politics — Diri 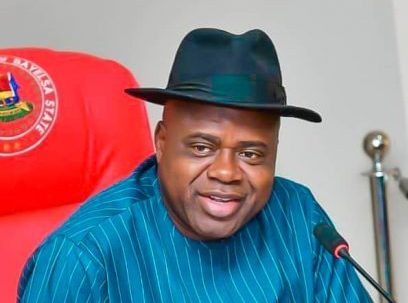 Governor Douye Diri of Bayelsa has called on political, traditional and religious leaders in the South South region to shun politics of violence and embrace unity and love.

Diri said this at a one-day zonal prayer summit organised by the South South zone of the Christian Association of Nigeria.

The summit held at Saint Patrick Catholic Church, Ovom in Yenagoa on Wednesday.

Diri said that politics should be seen as a means to develop people and not to kill and disunite them.

In a statement, the governor was quoted by his Chief Press Secretary, Daniel Alabrah, as saying that Christians should not avoid politics as even Jesus Christ was concerned about the welfare of the people, which politics is all about.

Diri noted that democracy does not require the use of arms, but the building of consensus for development and urged people of the region to embrace politics of development.

The governor said the South South was blessed with a lot of potential to be great, but that greatness could only be achieved if the people were united.

He again justified the decision of the South South governors to ban open grazing, stressing that herders should not be allowed to use their business to destroy that of the farmers.

Diri appreciated the South South Zone of CAN for the prayer summit and urged the church not to relent in praying for the region and the country.

His words: “Politics is about the welfare of people, which Jesus did.

“So we should not fight ourselves.

“There is no difference between the church and government.

“South South is a blessed region.

“Let us pray that God will give us leaders that will see the potential and develop the region.

“If we cooperate, it will be difficult for any other region to beat us.

“It is not all about oil.

“South South is rich in agric and other resources.

“But we need peace for investors to come in.

“A lot of times we are misunderstood.

“You can only contrast militancy to Boko Haram, but you cannot compare them.

“If we are united as Southerners, there are a lot of benefits.

“Our economy will boom as we have the potential.

“Ultimate power belongs to the people.

“Always look for alternative ways to call government to order rather than resort to protest as the first step to resolve issues.”

Diri thanked the National President, Pentecostal Fellowship of Nigeria, Bishop Wale Oke, and others for being steadfast in prayers and fasting to ensure that Bayelsa State did not go into the wrong hands.

In a welcome address, the CAN South South Zonal Chairman, Archbishop Israel Ege, said the essence of the summit was to seek the face of God for development of the region and country at large.

Ege lauded the governor for his developmental efforts and prayed God to continue to bless him with the grace to serve people of the state.

Delivering a sermon, Bishop Oke said the nation was passing through challenges that God alone can solve, stressing that nothing is impossible with God.

Describing the South South as the sustainer of Nigeria, he however expressed regrets that the region has not got what it deserved from the country and urged the people to continue to seek the face of God.