Golden Eaglets through to Niger 2015 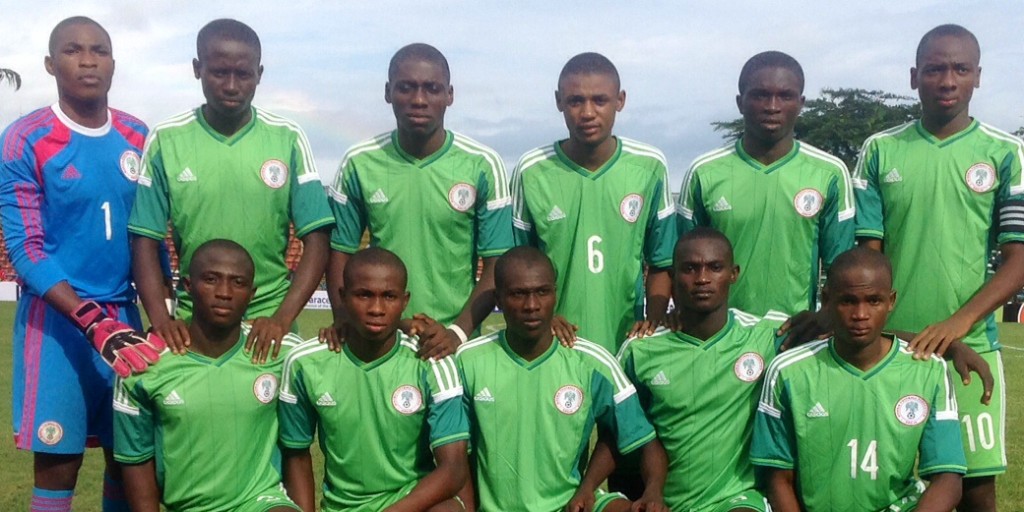 Nigeria’s Under-17 side, the Golden Eaglets, on Saturday thrashed Gabon 5-0 at the U. J Esuene Sports Stadium in Calabar, Cross River State in their second leg-final qualifier towards the African Under-17 Championship.
The win gave the Emmanuel Amuneke-tutored side a 6-2 aggregate win after they lost 1-2 in Libreville a fortnight ago and a ticket to next year’s Championship to be hosted in Niger between February 15 and March 1.
Among the goal scorers for Nigeria on Saturday were the duo of Ebere Osinachi and Kehinde Ayinde, who scored a brace each after Captain Kelechi Nwakali had grabbed the curtain raiser through a penalty.
Nigeria started the game cautiously as the Gabonese soaked the initial pressure but it was not too long before the visitors were put in real danger when Suleiman Abdullahi sprinted and waltzed through the right wing and pushed the ball on the path of Kingsley Michael only to be brought down in the box by Gabonese goalkeeper, Noubi Fotso.
Captain Kelechi Nwakali scored the resultant penalty kick as he sent Fotso the other way for Nigeria’s first goal in the 19th minute.
Eleven minutes later, the second goal came through the right flank yet again when Samuel Chukwueze’s pull out found Ebere Osinachi who wasted no time before pushing the ball into the net.
On the other end, Golden Eaglets’ goalkeeper, Akpan Udoh, stopped the visitors’ first real chance as he cuddled Presley Babini Bouyi goal-bound pull out from the right flank in the 37th minute.
But five minutes after, it was a combination of Chukwueze and Osinachi that resulted into the third goal when the latter took a solo run after a pass from the former before shooting an angular shot beyond Fotso yet again as the Golden Eaglets ended the first half on that positive note.
The Golden Eaglets continued their domination at the restart but were lucky not to have conceded a goal in the 50th minute when Banini Bouyi’s incisive shot hit the post while Akpan was rooted to the spot.
Chukwueze could have capped his fine performance with a goal in the 80th minute but he shot straight over the bar after waltzing his way into the Gabonese post.
But Kehinde Ayinde, who came in for injured Michael, grabbed Nigeria’s fourth goal and fifth goal in the 78th minute and 90th minute to the delight of everyone at the U.J. Esuene Stadium.