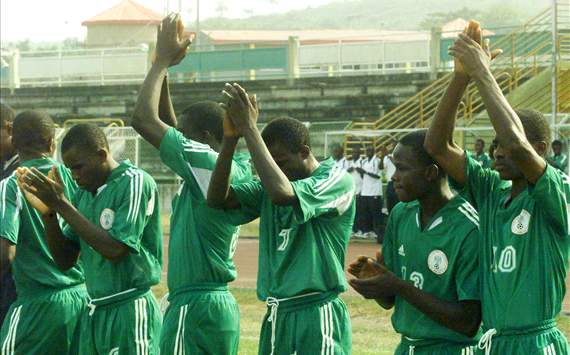 Nigeria’s U-17 side, the Golden Eaglets, beat Rapture Academy International of Uyo 3-2 in a practice match at the NFF/FIFA Goal Project pitch in Abuja on Saturday.

Kelechi Nwakali, Victor Osimhen and Noah Rasaq all scored for the Golden Eaglets, while Ezekiel Lawrence and Chidi Randy were on target for Rapture.

Coach Emmanuel Amuneke fielded mostly new recruits but they were wasteful in front of goal until Captain Nwakali grabbed the opener in the 32nd minute.

Within the shadow of the first half, Osimhen added Eaglets’ second goal but seconds later Raptures’ Ezekiel pulled one back for the Uyo-based side.

Noah would later score Eaglets’ third goal midway into the second half, while Randy scored the last goal with seven minutes to spare.

Yet, Coach Amuneke described the win as inconsequential, adding the most important thing was seeing the performance of the players under consideration in match situation.