French Open: Krejcikova, Pavlyuchenkova to face off in final 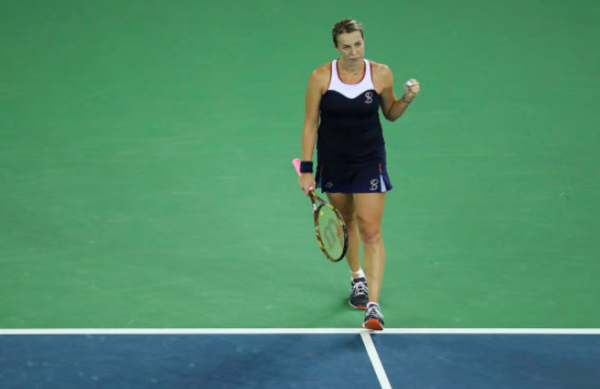 Anastasia Pavlyuchenkova will play Barbora Krejcikova for the French Open title after the Russian reached her first Grand Slam final Thursday at a record 52nd attempt, while the Czech saved a match point in a dramatic win over Maria Sakkari.

Pavlyuchenkova defeated world number 85, Tamara Zidansek of Slovenia, 7-5, 6-3, with the unseeded Krejcikova fighting back from the brink to outlast Sakkari 7-5, 4-6, 9-7 after three hours and 18 minutes.

Pavlyuchenkova, a quarter-finalist in Paris a decade ago, became the first woman to play more than 50 majors before making her first final, breaking the previous mark of 44 set by 2015 US Open runner-up, Roberta Vinci.

“It’s been a long road. I had my own long special road. Everybody has different ways. I’m just happy I’m in the final,” said the 29-year-old Pavlyuchenkova, who made her Grand Slam debut at Wimbledon in 2007.

The 31st seed dropped serve in the opening game on a sun-drenched Court Philippe Chatrier but capitalised on a fourth break point against Zidansek to break back for 2-2.

Pavlyuchenkova, a former junior world number one and Roland Garros girls’ singles finalist in 2006, surged 5-3 ahead as Zidansek sprayed a forehand wide.

But the Slovenian immediately broke back, rewarded for her persistence and tireless defence.

Zidansek then carved herself two break points at 5-5 but Pavlyuchenkova managed to hold, and the Russian struck the following game to wrap up the first set as her opponent committed a costly double fault.

Pavlyuchenkova carried that momentum into the second set, breaking to lead 2-0. Zidansek responded to get back on serve but was again broken as the Russian swept into a 4-1 advantage.

Zidansek, twice two points from defeat in the first round here, continued to scrap hard and the nerves resurfaced for Pavlyuchenkova as two double faults allowed the Slovenian to claw her way back to 4-3.

But Pavlyuchenkova was not going to be denied, as another break left her serving for the match, with victory assured when Zidansek fired wide.