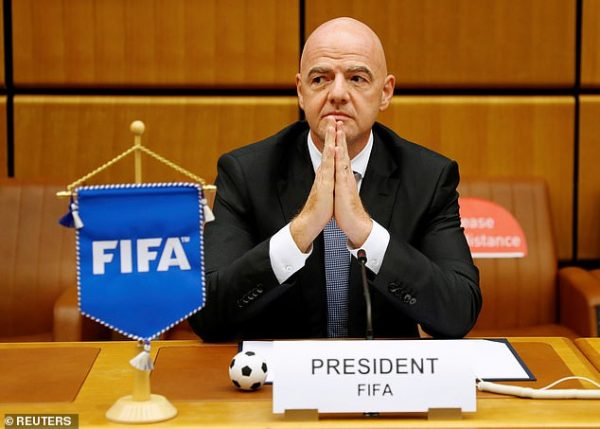 The 50-year-old has been confirmed to have contracted the virus and is now entering a period of self-isolation.

Infantino is said to have shown just “mild symptoms” of COVID-19, and all those who have come into contact with him in previous days are said to have been informed.

FIFA issued a media statement on Tuesday in which it was outlined that Infantino will remain in complete isolation for “at least ten days”.

The statement read: “FIFA President Gianni Infantino has received confirmation today that he has tested positive for coronavirus.

“The FIFA president, who has reported mild symptoms, has immediately placed himself in self-isolation and will remain in quarantine for at least ten days.

“All people who came into contact with the FIFA president during the last few days have been informed accordingly and they are being requested to take the necessary steps.

The pandemic continues to wreak havoc across the football landscape, after it was revealed this week that Italian giants Lazio have had their Champions League preparations thrown into chaos amid fears of an outbreak in the squad.

he Serie A outfit take on Club Brugge away on Wednesday night in Europe’s elite competition, but according to Tuttomercatoweb, Simone Inzaghi was left with a depleted squad on Tuesday.

Only 12 players trained on the eve of the Champions League encounter – leading to fears that coronavirus has ravaged Lazio’s squad following tests carried out on Monday.

A total of nine players were missing from the training session, including star names Ciro Immobile and Luis Alberto.

The reasons for their absence from training has yet to be officially explained by the Serie A outfit but there are big concerns there has been a Covid outbreak.

Likewise, this week Juventus and Cristiano Ronaldo have been waiting anxiously to learn whether he is able to face Barcelona and his age-old rival Lionel Messi.

Ronaldo has been self-isolating at home since he tested positive for coronavirus while away on international duty with Portugal on October 13.

The 35-year-old recorded another positive result last Thursday, throwing into doubt his participation in Juventus’ Champions League clash with Barcelona this week.

However Ronaldo is set to find out if his late bid to return in time for Wednesday’s tie has been successful with his latest Covid-19 test result due later.

A negative result would mean his quarantine period is over and as long as the result has come back within 24 hours of the kick-off, so 8pm on Tuesday night, he will be able to play.