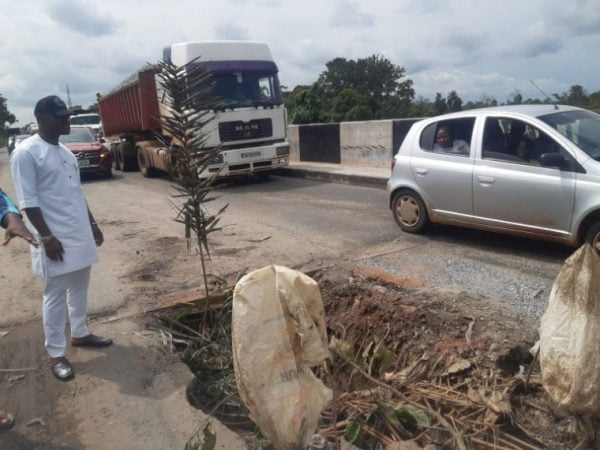 A section of the bridge before Okada Junction on the Lagos-Benin Highway has caved in and has been causing unending gridlocks.

The lawmaker inspected the bridge and told the News Agency of Nigeria that it would collapse unless urgent steps were taken to salvage it.

Idahosa, chairman of the House Committee on Legislative Compliance, expressed regret that the bridge had been left unattended by the authorities concerned in spite of the heavy traffic on the route.

“The Lagos-Benin Highway is about the busiest road in the country and I am sure you will understand why I worry about what might happen if this bridge is not fixed as soon as possible.

“From the portion that has completely caved in, one can clearly see the river and also notice the increase in vibration as motorists struggle to find their way through the narrow section that is good.

“It is a disaster waiting to happen and I am calling on the relevant government authority, the Ministry of Works through the Federal Roads Maintenance Agency to urgently address the problem,’’ Idahosa said.