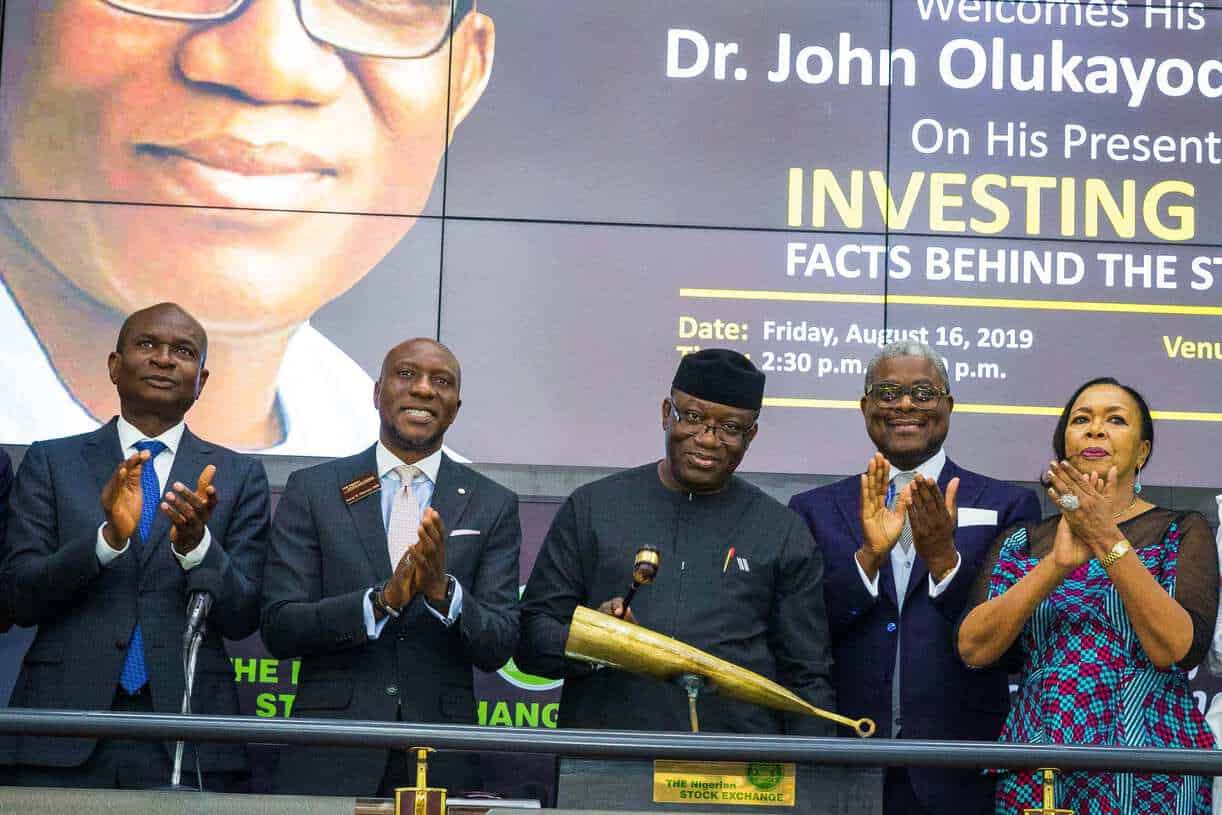 The Ekiti State Governor, Dr. Kayode Fayemi, has said his administration has put in place policies and legislations that will ensure that the State becomes one of the top three states in ease of doing business in the country.
Fayemi, who said that the state was rated number four in ease of doing business in 2014 when he left office, before sliding to the 32nd position thereafter, said he was sure the state would soon return to the number three spot.
He urged investors to invest in the state, taking advantage of the business-friendly environment.
The Governor stated this while presenting: “Investing in Ekiti: Facts Behind the State Economy,” at the Nigerian Stock Exchange, Lagos on Friday, adding that his administration has started putting in place relevant laws and creating enabling environment that could attract investments to the State.
Fayemi, who was received by the Director-General of NSE, Oscar Onyema, and the President, Otunba Abimbola Ogunbanjo, also rang the bell signifying the close of transaction for the day.
Speaking at a session with investors and stock brokers, Dr. Fayemi said the efforts of his government had started yielding positive results with the return of development partners to the State as well as the resuscitation of some moribund businesses like Gossy Water as well as return of three banks that had left the state, owing to unfriendly business policies of the immediate past administration.
He disclosed that the state government was equally working hard to provide adequate security of lives and investment in the State, even as the security architecture of the State has been improved upon in the last 10 months.
He said: “Ekiti was fourth in the ease of doing business during my first tenure until it dropped to 32nd position. We are starting to regain the confidence of investors by reactivating those laws which we put in place in my first administration to create an enabling environment for investment to thrive.
“We have renewed our focus on peace and security which is the foundation of any economic development; and started investing in developing the infrastructure required to make Ekiti State a competitive destination for business. We have also passed the Law establishing the Ekiti State Development and Investment Promotion Agency (EKDIPA). Once the agency commences full operations, it will drive our Ease of Doing Business reforms and provide investors with a one-stop shop to deal with investment related matters.”
While speaking on the State’s partnership with the Nigerian Stock Exchange, the governor expressed optimism that the continued partnership would help the State in unlocking investment in its focus sectors, while also optimizing state-owned enterprises.
The governor said governments can partner with the capital market to get funds for projects which support economic growth, provide jobs for the unemployed and increase access to public utilities.
Fayemi explained that his efforts as governor is aimed at making Ekiti an attractive destination for investors, delivering sustainable economic growth, putting people to work and lifting the citizens out of poverty.
He highlighted the core areas where the State seeks partnership to include agriculture, tourism and the knowledge zone, a project which is designed to ensure the supporting infrastructure for power, transport, housing, recreation, medical and other services are available round the clock.
Fayemi said: “We have renewed our focus on peace and security, which is the foundation of any economic development; and started investing in developing the infrastructure required to make Ekiti a competitive destination for business.
“We are quite concerned about the increasing spate of violence against ordinary citizens and it is the duty of the government to provide security and welfare of the citizens.
“The steps we have taken since we assumed office is to work in collaboration with neighbouring states because those things just cut across, particularly as it affects kidnapping and banditry to make the highways safe.”
Fayemi stated that the government’s social investment programmes needed to be expanded and made more effective to create jobs for the youth.
He added that the government could not create jobs in massive terms without the collaboration of the private sector.
He said the state’s focus on agriculture, especially a Special Agric Processing Zone, would not only improve the productivity of farmers, but also provide the infrastructure required for processing activities.
He said: “Already, the market is responding to our approach and we expect to close a partnership on the currently unutilised Ikun Dairy Farm, with a leading dairy company in Nigeria soon.
“Our belief is that Ekiti is ready for more of such investments, and we are available to answer questions on investment opportunities that exists.”
Earlier, Onyema had said that the NSE had examined and noted an improvement in the GDP of the State, with a 63 per cent economic growth, which were necessitated by the projects executed by Fayemi between 2011 and 2014.
Onyema, who described Fayemi as a reform-minded leader, commended him for his commitment to providing durable infrastructure and employment opportunities for the State.
He said the governor had created a roadmap for other political leaders to follow in their quest to deliver the goods to the people.
Onyema said the governor was committed to grassroots development, which was positively impacting the lives of the citizens of the state.
He said: “We acknowledge your Excellency’s progressive leadership and reform-minded approach in managing the economy of Ekiti.
“Your strategies towards revitalising the agricultural, manufacturing, mining, trade and tourism sectors, which together account for 75 per cent of the state’s gross domestic product are also commendable.
“For instance, you have increased the proportion of capital spending in the 2019 budget to 44 per cent from 31 per cent in 2018 and channelled budgetary resources toward pro-growth projects.
“We recognise that to build a sustainable economy for the estimated 3.5 million citizens of Ekiti, supported by vibrant sectors, both state-owned and private sector enterprises, will require access to right-sized capital.”