EPL: Why Man U vs Liverpool was postponed 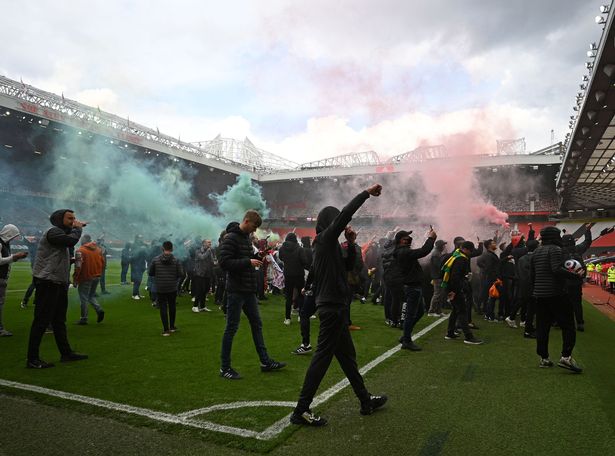 Manchester United’s Premier League clash against Liverpool has been postponed following widespread protests at Old Trafford on Sunday evening – with fans getting onto the pitch.

The fixture between the two old rivals was been targeted by home supporters as a continuation of their recent protests over Glazer ownership of the club.

While the planned kick-off time of 4:30pm was initially delayed, that plan was scrapped following talks over the safety of those involved.

As well as numerous groups forming outside the ground, many were spotted on the Old Trafford pitch just hours before their fixture was due to start.

The latest protest comes after a large scale gathering outside the ground following the failed European Super League plans, as well as a training ground meeting.

While supporters were cleared from the pitch and the surrounding area long before the announcement, the disruption was said to have put those involved in danger.

The full United statement reads: “Following discussion between the Police, The Premier League, Trafford Council and the clubs, our match against Liverpool has been postponed due to safety and security considerations around the protest today.

“Discussions will now take place with the Premier League on a revised date for the fixture.

“Our fans are passionate about Manchester United, and we completely acknowledge the right to free expression and peaceful protest.

“However, we regret the disruption to the team and actions which put other fans, staff, and the police in danger. We thank the police for their support and will assist them in any subsequent investigations.”