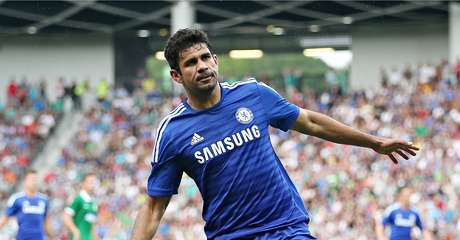 Stoke City twice fought back but it was not enough to prevent Chelsea racking up a record-equalling 4-2 victory at Stamford Bridge on Saturday.
The Blues were pushed hard by their opponents, who hit back through Bruno Martins Indi and Peter Crouch goals in the second half, but they did enough to make it a perfect 13 wins on the spin.
Willian scored twice, either side of goals from Gary Cahill and Diego Costa, to put Chelsea level with Preston North End, Sunderland and, most recently, Arsenal for successive games won in a single season.
It took the visitors just 55 seconds of the second half to level things up, though, with Martins Indi sweeping home a Crouch knockdown to score from his side’s first attempt on target all match.
That was just the third goal the Blues had conceded during their winning run, denying them an 11th clean sheet in that time, but they responded well and came close to a second through Willian and Costa attempts.
Willian then restored Chelsea’s lead just short of the hour mark following a well worked team move, culminating in Moses picking out Hazard to deftly lay the ball off for the Brazilian to rifle past Grant’s reach.
There was a chance for Costa to add a second from close range soon after only to sweep wide, and that almost proved costly when Stoke levelled up the contest for a second time.
In a near replica of Chelsea’s second, substitute Bojan Krkic found Mame Biram Diouf in some space inside the box, with the Senegalese feeding it through to Crouch to score his first goal in 22 games.
Chelsea were given a chance to show just why they are such strong favourites for the title, which they justified in style by hitting back 75 seconds later through Willian’s sweeping finish after being played in by Cesc Fabregas.
There was to be no late twist, though, as Costa outmuscled Martins Indi and blasted the ball through Grant from nowhere to make it seven home wins in succession for Chelsea and 13 overall – now just one away from equalling Arsenal’s other record of 14-straight wins, coming across two separate seasons.