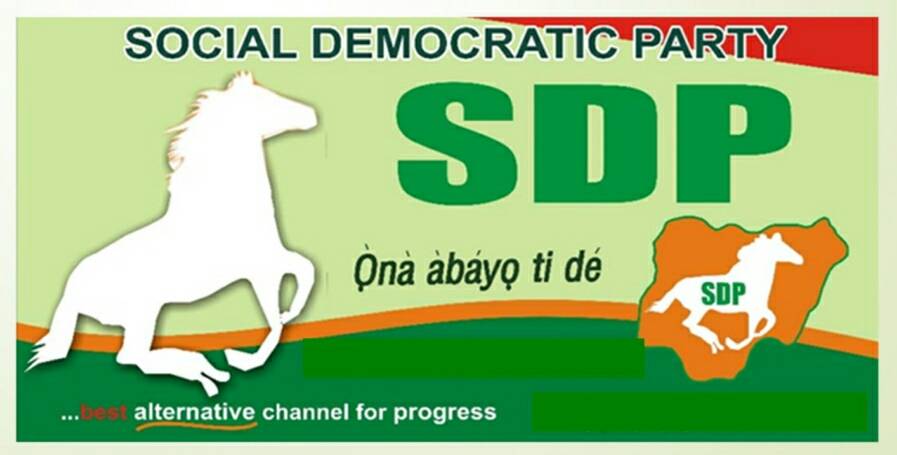 As the preparations for the June 18 Governorship Election in Ekiti State reach the peak, the National leadership of the opposition Social Democratic Party, (SDP) has raised the alarm over what it described as “plots by the ruling All Progressives Congress, (APC) and the opposition Peoples Democratic Party, (PDP), in the state to undermine its growing influence and that of its candidate, Chief Segun Oni in the poll.

The alarm was contained in a strong-worded petition written to President Mohammad Buhari and the major Foreign Embassies in the country dated May 19, 2022,  and signed by its National Chairman, Alhaji Shehu Musa Gabam  , and made available to newsmen  in Anuja at the weekend

The Party also forwarded the copies of the petition to the Office of the National Security Adviser to the President, ONSA, the Secretary to the Government of the Federation, SGF, the Service Chiefs, Inspector General Of Police, IGP, Department of State Services, DSS, National Intelligence Agency, NIA, Nigeria Security and Civil Defence Corps, NSCDC and the European Union among others, called for urgent intervention to allow for a free, fair and credible election in the State.

SDP said: “as we are getting ready for the June 18, 2022 gubernatorial election in Ekiti State, there growing concerns which need be highlighted for the general good of our electoral system and the deepening of our current democratic culture

“The SDP has credible intelligence to the effect that the incumbent APC administration in the State and the PDP are stragtizing to undermine the growing influence of the SDP and its Candidate, the former Governor of the state, Chief Segun Oni, what gave rise to this suspicious was the palpable sing  of machinations that we witness on 6th April, 2022, when political hoodlums attacked the convoy led by our Candidate, Chief Oni at Efon Alaaye in Efon Alaaye Local Government Area of Ekiti State”

It pointed out that the attack which was widely reported in the media prompted the Party to write a protest letter to the Inspector General of Police, IGP, which was a likely pointer to what it evisaged in the days ahead.

“Consequently, it our appeal to Embassies in Nigeria to keep an eye on thuggery, votes buying, rigging of election results, voters harassment and possible disruption of electoral processes

“It is our considered opinion, the INEC should be put under pressure to do the needful by ensuring that the bimodal system works for effective results”.

While acknowledging the sincerity of the INEC Chairman, Prof Mahmud Yakub in trying to ensure a level playing ground for all in electoral processes in the country, the party urged him to ensure that only credible electoral officials were assigned to conduct the Ekiti poll.

On security, the party appealed to the Inspector General of Police (IGP), Usman Alkali Baba and the heads of other security forces that would be partaking in the election to be civil and neutral in the course of the national assignment

According to it, “we call on all the entire security agencies that would be assigned to the election in Ekiti State to ensure that every vote counts as that will greatly reduce voters apathy in the upcoming round of elections in 2023”

SDP also appealed to President Buhari “who approves the deployment of security agencies to various polling Units in the upcoming elections in Ekiti and Osun States to ensure that the legacy that he promised severally to bequeath to Nigeria, is free, fair and credible elections is being upheld”.