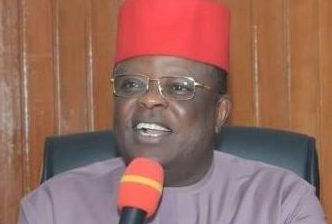 The most talked-about political event in Nigeria today is the defection last week of Ebonyi State Governor, David Umahi, from the Peoples Democratic Party to the All Progressives Congress. In a Nigeria where morality, both on the social and political planes, have gone down the abyss, that is just as well.

Political science scholars have been scrambling to explain this weird and atypical Nigerian political prostitution culture where a politician wakes up in the morning as belonging to a political party, by midday, is divorced from that party and by nightfall, is in bed with yet another.

Perhaps it speaks volume of who we are as a people, with a thin skin tissue of reliability and trust, waxing luscious in deceit, double-face and gross irresponsibility. Umahi just mirrors us in our totality and as such, the need to clap him into the next dalliance.

Rather than enter his red light district without a whimper, roll into bed without ceremony, switch off the light and engage in what his colleagues do, Umahi is seeking to canonise his prostitution. And that is the bother. In bed with his most recent client, Umahi slipped into Aso Rock almost immediately and got his adulterous partner to beatify him for his prostitution.

It is “a bold move driven purely by principle rather than opportunistic motives,” President Muhammadu Buhari was reported to have described this glaring prostitution. “I am proud of Governor David Umahi for taking this bold decision in accordance with his conscience and principles rather than any external influence or coercion,” he continued. To ram home the nail of ignominy on the portmanteau of shame, the president said: “With men like Umahi, I foresee a brighter future for our democracy because the voters will be more motivated by performance records of parties and their candidates.” And Jesus wept. Uncontrollably.

Umahi himself has since been struggling to justify why he had to change a dalliance partner. He immediately eloped into a tribal profiling which conmen in positions of power had always done. His changing political party, Umahi told reporters in Abakaliki, capital of Ebonyi State, held him up as a martyr for the attainment of Igbo presidency, a guinea pig, if you like. Because martyrdom is about sacrificing oneself for the people’s tomorrow, he is a martyr, he said further. Smart Alec, this one is, misappropriating selfish interest as group interest, to hoodwink his unsuspecting people.

The truth is, Umahi had merely moved from a maggots’ cesspool into a real sewage. This is because there is no marked difference between the PDP where he was coming from and the APC where he landed. Their difference can be contextualized in the mould of someone trying to justify and submit that there was a preferable immorality between the ancient red light district prostitution and today’s youth prostitution famously labeled runs.
Give it to Umahi, he has cogent reason to want to become Nigerian president. Especially after Buhari has sat on the same seat for five years now, with a descending country in his grips. You need strong courage to confront such freeze without wondering if you were not qualified to aim at the same seat.

Let it be told that Umahi would soon realize and too late too, that he just left the frying pan for a walk on the fire gauze. Except for the satisfaction of his vanity, his decamping will end up a total disaster. Not because he would not cavort in the midst of power vultures of the North and have photo-ops with them but because he would soon realize that they have deep-seated disdain for him and his people. By then, he would find himself at the same intersection where MKO Abiola found himself in the early 1980s, after variously tying pampers and diapers for the Northern power hegemons.

When a man who, on his first trip outside the country, showed unquantifiable disdain for your people and manifested it in five years of his governance, yet you assume you can babysit him to cede power to you and your people, you can only be wished good luck in your fantasy of illusion. At his first official state visit to the United States on July 22, 2015, in an address at the United States Institute of Peace, Buhari had told Dr. Pauline Baker, the President Emeritus of The Fund for Peace, who asked him how inclusive his government would be, and matter-of-factly too that, “I hope you have a copy of the election results. The constituents, for example, (who) gave me 97% (of the votes) cannot in all honesty be treated on same issues with constituencies that gave me 5%.”

It was all these that made Jesus Christ of Nazareth to weep once again. For Umahi.