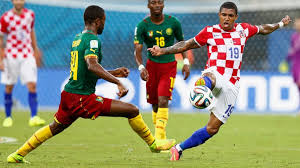 Cameroon join Spain out of the World Cup exit door after a 4-0 defeat at the hands of Croatia.
Olic tapped in a short pass from Ivan Perisic in the 11th minute after latching onto a loose ball in the area.
It went from bad to worse for Cameroon when midfielder Alex Song was given a red card for elbowing Mario Mandzukic in the back in an off-the-ball incident.
The African side came out attacking from the start, but never really troubled Croatia goalkeeper Stipe Pletikosa.
The Croatians started the second by doubling their lead, with Ivan Perisic claiming a fine solo goal.
Charles Itandje’s goal-kick went straight to Perisic on the left wing, who outpaced Dany Nounkeu down the flank to smash it at the near post.
Mandzukic made it three for Croatia on 61 minutes, thumping in a header from seven yards out thanks to terrible marking on a corner.
The Bayern Munich target man then wrapped up the win in the 73rd minute, picking up a rebound from an Eduardo shot from 15-yards out.
Ivan Rakitic had the chance to make it five with two minutes of normal time remaining, but couldn’t direct his chip-shot on target.