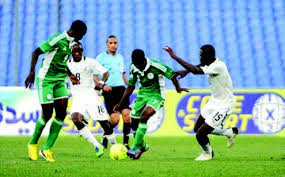 Golden Eaglets’ goalkeeper, Uzoho Francis Odinaka, who marked his birthday Monday, has begged his teammates to beat Iran as a befitting present for him.
The towering Odi, as he’s fondly called, got a surprise birthday cake from the Local Organising Committee of the 2013 FIFA Under-17 World Cup and was explicit when asked what his birthday wishes were.
“Just want us to win this cup,” he said with a glee before cutting the tape alongside some members of the LOC as well as teammates, Isaac Success and Musa Muhammed, the captain.
Meanwhile, four-goal hero against Mexico, Kelechi Iheanacho, has pledged on behalf of his teammates a victorious outing against Iran, adding that the objective of the team supersedes that of any individual.
“By the grace of God, we are going to win our match and I don’t care even if I don’t score,” he said. “The most important thing for us is to win all our matches.
“We would do everything to make it a special occasion for Odinaka.”
Iheanacho was born on October 3.
Meanwhile, Musa Yahaya has equally promised to continue to give his best after he got his wish of a branded footwear as a gift from the Personal Assistant to the President of the Nigeria Football Federation, Mallam Nasir Jibril.
“Oga promised to give me canvass if I play so well in our last game and I’m so happy that he has given me this,” said the usual shy Yahaya, who scored twice against Iraq to add to his earlier goal against Sweden.