Atiku in crushing defeat of Buhari in President’s consultants’ polls 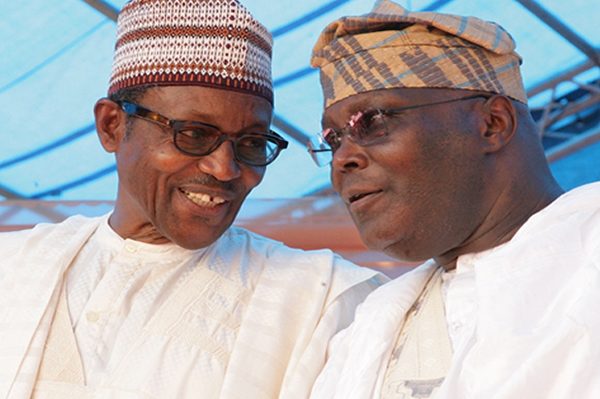 Share
Facebook Twitter LinkedIn Pinterest Email
Former Vice President and leading presidential hopeful of the Peoples Democratic Party, Atiku Abubakar has handed President Muhammadu Buhari a crushing defeat in another online poll conducted by the President’s own consultant.
A flurry of polls, largely promoted by pro-Buhari influencers, sprung up shortly after the administration marked its third anniversary on May 29.
In the first poll conducted by Mark Essien via his Twitter handle: @markessien, Abubakar polled 43 per cent, while Buhari trailed him with 35 per cent.
But in the second the poll conducted by @YNaija, Abubakar polled 70 per cent versus President Buhari’s 19 per cent.
The other participants in the poll, Prof. Kingsley Moghalu and Fela Durotoye, polled 6 per cent and 5 per cent respectively (See link https://twitter.com/YNaija/status/1001584089525256192).
The poll, which commenced on May 29 and ended 11pm oo June 1, asked respondents: “Which of them will have your vote, if you had to vote today?”
At the end of the voting of 7,444 respondents, seven out of every 10 respondents, representing about 5,210, settled for Abubakar, compared to Buhari’s vote of 1,414, Moghalu’s 446 and Durotoye’s 372.
The outcome of the poll by YNaija, Nigeria’s most successful youth blog run by Red Media, who played a major role in Buhari’s media during the 2015 elections, is a reflection of result of the latest poll by NOI/Gallup Poll, which saw the President’s rating dip to 41 per cent.
In that NO1/Gallup Poll also, the administration’s three-year scorecard in the critical areas that have the greatest impact on the lives of ordinary Nigerians, the presumed base of the President were dismal: Economy (16%), Job Creation (15%) and Poverty Alleviation (12%).
Post Views: 0
Atiku Abubakar fela durotoye Kingsley Moghalu Mark Essien Muhammadu Buhari PDP Peoples democratic Party
Share. Facebook Twitter Pinterest LinkedIn Tumblr Email