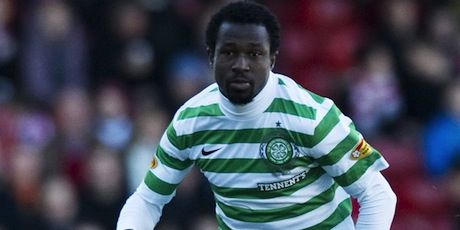 Former Nigerian international, Efe Ambrose, has joined Livingston on an 18-month contract.
The Nigerian has been without a club since his period at Derby County came to an end.
The West Lothian side are currently fifth in the league and want to ensure that they achieve a top six finish.
And Ambrose will get a chance to face his former side when Celtic visit the Tony Macaroni Arena on March 4.
Ambrose was delighted to get the deal agreed to join Livi.
“I spoke to Marvin Bartley when I got the idea in my head to come back to Scotland,” he explained to the Media, as reported by Scottish Sun.
“When he went to Livingston from Hibs in the summer I followed the move closely. I watched him play and called him up and he told me it was a really good club.
“I also know what has been going on in Scottish football because I have been watching even when I was back home in Africa. And eventually I decided I wanted to come back to Scotland and play again.
“So I spoke with Marv and then spoke with the coaches to see what we can do and everything progressed from there.”
Ambrose will wear the number 25 shirt and goes straight into the squad for Saturday’s trip to old club, Hibernian.
He said: “I thought something might happen in December but we couldn’t get it done at the time. I was disappointed, I kept asking my agent to see if we could make it happen.
“And when Livingston signed another defender in January I thought the door was closed. But the chance has now come up again. And now I want to help Livingston achieve what they want to, which is the top six, and then fight for the European places.
“Nothing is impossible in football,” he said.
Ambrose, now 31, arrived at Celtic in 2012 and immediately became a fans favourite with his trade-mark summersaults when he scored away to St Mirren. But Barcelona – they the greatest club side in the world were due to arrive in the East End of Glasgow and Celtic were far from being at their strongest.
It was no problem to Efe and Co and Messi and other superstars were kept out until finally getting a goal in stoppage time but it was too late with Celtic already two goals to the good.
Ambrose went to the African Nations Cup in early 2013 and ended up winning the trophy with Nigeria and the Celtic man was named in the team of the tournament.
He rushed back to help Celtic and play in the Champions League against Juventus but the Italians had noticed a weakness in dealing with high balls up the park and they ruthlessly exposed Efe’s Achilles heel.
More mistakes followed and gradually the support turned on Ambrose and it clearly affected his confidence.
After scoring an own goal in Dublin in a friendly against Barcelona early in Brendan Rodgers’ time at Celtic manager, it was clear from the support’s reaction, that everyone had had enough and Rodgers put everyone out of their misery by moving Ambrose on.