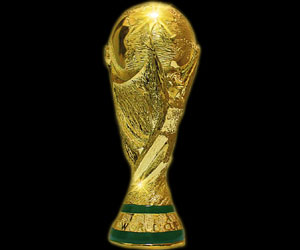 The World Cup trophy has sustained a bit of damage amidst jumping, frolicking and merriment-making in Berlin, Germany.
The German Football Federation President, Wolfgang Niersbach, revealed that a small piece of the trophy is now missing.
“At one point, a small piece of our World Cup trophy was chipped off,” Niersbach stated. “But do not worry! We have specialists on the case who can fix it. We have investigated persistently who it was that damaged the trophy, but the investigation was concluded without a result.”
Unlike the Jules Rimet trophy, which Brazil was allowed to keep after winning their third World Cup in 1970, the current FIFA World Cup trophy cannot be won outright.
The new World Cup trophy is a replica, made of bronze and plated with gold, rather than the solid gold cup that presumably sits behind locked gates and armed guards.
It can be recalled that Sergio Ramos dropped the Coppa del Rey while celebrating Real Madrid’s victory in the Spanish cup and the bus drove over the trophy.