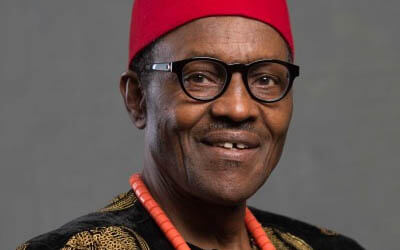 President Muhammadu Buhari has said his administration is worried by the continued stay of the Chibok schoolgirls in the hands of their captors and is working tirelessly to get them released.
The News Agency of Nigeria reports that the President stated this on Tuesday in Paris, France while responding to questions from members of the Nigerian community in France under the auspices of Nigerians in Diaspora Organization.
Buhari noted that the unfortunate incident had attracted global attention and sympathy within and outside Nigeria and government could not fold its alms over the issue.
He said the Federal Government was ready to negotiate with their captors with a view to effecting their release.
He said: “The issue of Chibok girls has occupied our minds and because of the international attention it drew and the sympathy throughout the country and the world, the government is (looking into possibility of) negotiating with some of the Boko Haram leadership.”
President Buhari, however, stated that government must first establish genuine members of the sect so that it would not make the mistake of engaging the wrong persons.
He said: “It is a very sensitive development in the sense that first we have to establish: are they genuine leaders of the Boko Haram?
“That is number one.
“Number two: What are their terms.
“The first impression we had was not very encouraging.”
Buhari revealed that one of the conditions given by the group was to release one of its members who had been strategic in developing Improvised Explosives Devices.
He said this was “a demand that government will not accept.
“They wanted us to release one of their leaders who is a strategic person in developing and making Improvised IEDs that is causing a lot of havoc in the country by blowing people in Churches, Mosques, market places, motor parks and other places.
“But it is very important that if we are going to talk to anybody, we have to know how much he is worth.
“Let them bring all the girls and then we will be prepared to negotiate.
“I will allow them to come back to Nigeria or to be absorbed in the community.
“We have to be very careful.
“The concern we have for the Chibok girls, one only imagines if they got a daughter there between 14 and 18 and for more than one and a half years, a lot of the parents who have died would rather see the graves of their daughters rather than the condition they imagine they are in.
“This has drawn a lot of sympathy throughout the world.
“That is why this government is getting very hard in negotiating and getting the balance of those who are alive.”
President Buhari assured the Diasporans that his administration was doing everything possible to improve on the state of the economy through provision of infrastructure in critical sectors.
The President’s Special Adviser on Media and Publicity, Femi Adesina, had in July confirmed the willingness of government to engage the sect if they were ready for negotiation.
The Nigerian Army spokesman, Colonel Sani Usman, was quoted in the media as saying that members of the terror group, Boko Haram, were surrendering “en masse” and that the regional offensive was recording fruitful results against the militants.
Some Nigerians, who fielded questions during the interaction with President Buhari, requested to know what government was doing to guarantee the plight of the disabled.
Questions were also asked about the possibility of Diaspora Nigerians to vote during elections.
NAN.