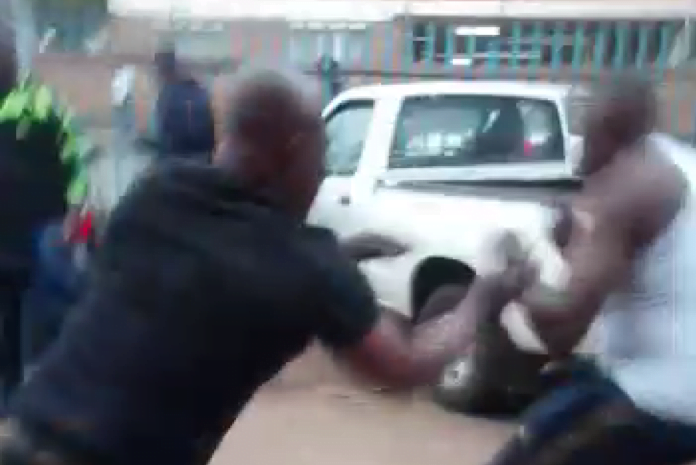 A Nigerian, simply identified as Batista, has killed his cousin, Ide, in South Africa.
A video that went viral showed Batista hitting Ide on the head with a big stone and thereafter pushed him down.
This was despite the presence of operatives of the South African Police and attempts by others present to prevent a fight over what has been termed a business transaction.
In fact at a point in the video, Ide ran away from Batista.
A statement by the President of Nigeria Citizens Association South Africa, Ben Okoli, said the incident happened in Kempton Park on Monday night at 7:30pm.
The statement reads: “NICASA has received information from our ward leader in Kempton Park, where two Nigerians engaged in a fight that led to the death of one of them. The two Nigerians are related, from Orlu Senatorial zone of Imo State.
“Our preliminary investigation revealed that the two Nigerians, one known as Batista and the other as Ide, got into fisticuffs apparently over disagreements on some money to be paid to some creditor.
“Batista, who was the senior of the two relatives hit the younger Ide with a brick on his head and pushed him to the ground.
“Ide fell to the ground hitting his medulla on the ground. He was rushed to Arwyp Hospital, Kempton Park, South Africa, where he died shortly after he was admitted.
“We are concerned about this unnecessary and avoidable death.
“It is disheartening that our citizens no longer have value for the sanctity of life nor the preferred conflict resolution mechanism available in our established associations, clubs and town unions. We advise our citizens to be law-abiding and be our brother’s keeper.
“NICASA will visit the suspect in the police custody tomorrow and will make more information available after the visit.”