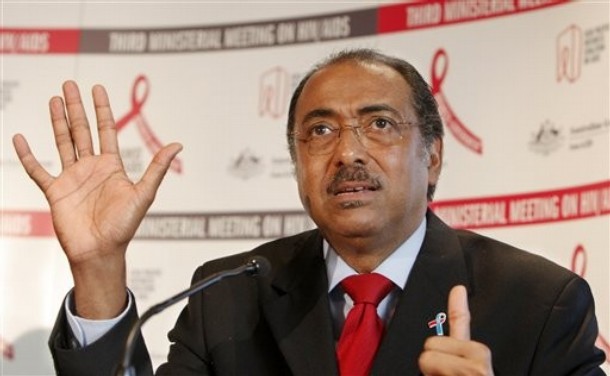 UNAIDS has said it welcomes mid-way results from two studies that show that a vaginal ring releasing long-acting antiretroviral medicine to prevent HIV is up to 54 per cent effective in preventing HIV infections among women.
The ring, which is replaced monthly, slowly releases the antiretroviral medicine dapivirine and could give women an additional HIV prevention option that is discreet and that they can control.
“These results are significant,” said Michel Sidibé, Executive Director of UNAIDS. “Structural, behavioural and biological factors make women more vulnerable to HIV infection, so it is extremely important that they have the opportunity to protect themselves from HIV, on their own terms.”
The interim results are from two large open-label studies — studies in which the participants know which medicine is being used; that is, no placebo is used — conducted in South Africa and Uganda.
The trails enrolled women between the ages of 20 and 50.
The HOPE trial, which began in August 2016 and enrolled more than 1,400 women by October 2017 — the time of the interim review — found a 54 per cent reduction in HIV risk.
This means that the rate of new HIV infections was 1.9 women newly infected for every 100 participants in a given year.
Based on statistical modelling, the researchers determined that the rate of new infections would have been 4.1 for every 100 had the women not been offered the ring.
The DREAM trial, which enrolled 940 women from July 2016, had similar findings, with a 54 per cent reduction in the HIV incidence rate.
The final results from both studies are expected in 2019.
Adherence was shown to be high in both of the trials, although the measures of adherence were not able to determine whether the women used the ring all of the time, most of the time or just some of the time.
The DREAM study showed that more than 90 per cent of the women in the study used the ring at least some of the time, based on residual drug levels, and the HOPE study showed that 89 per cent of returned rings indicated that the ring was used at least some of the time within the previous month.
This is the first time that efficacy of more than 50 per cent has been observed in HIV prevention trials involving only women.
Two previous phase III trials presented in 2016 — ASPIRE/MTN-020 and the Ring Study/IPM 027 — which did include a placebo group showed only modest protection (30 per cent) against HIV infection for women.
Women from both ASPIRE and the Ring Study were included in the HOPE and DREAMS trials.
Other scientific advances in HIV prevention presented in recent years include the PROUD and IPERGAY studies, which in 2015 reported an 86 per cent reduction in HIV acquisition among HIV-negative men who took antiretroviral medicines to prevent HIV, the 2011 HPTN 052 trial announcement, which showed that early initiation of antiretroviral therapy can reduce the risk of transmission to an uninfected partner by 96 per cent, and the 2011 Partners PrEP and TDF2 studies, that showed that a daily antiretroviral pill taken by people who do not have HIV infection can reduce their risk of acquiring HIV by up to 73 per cent.
The South Africa Orange Farm Intervention Trial, funded by the French Agence Nationale de Recherches sur le SIDA and published in 2005, demonstrated more than a 60 per cent reduction in HIV infections among circumcised men.
“These important breakthroughs show just how critical it is to continue to invest in research and development into new and effective HIV prevention options,” said Sidibé.
The latest reports showed that in 2016, funding for HIV prevention research and development was its lowest level in a decade, with no indications that investments are set to increase.
UNAIDS stressed that despite the recent scientific discoveries, there is still no single method that is fully protective against HIV.
To end the AIDS epidemic, UNAIDS strongly recommended a combination of HIV prevention options.
These can include the correct and consistent use of male or female condoms, waiting longer before having sex for the first time, having fewer partners, voluntary medical male circumcision, avoiding penetrative sex, the use of pre-exposure prophylaxis for people at higher risk of HIV infection and ensuring that all people living with HIV have immediate access to antiretroviral medicine.