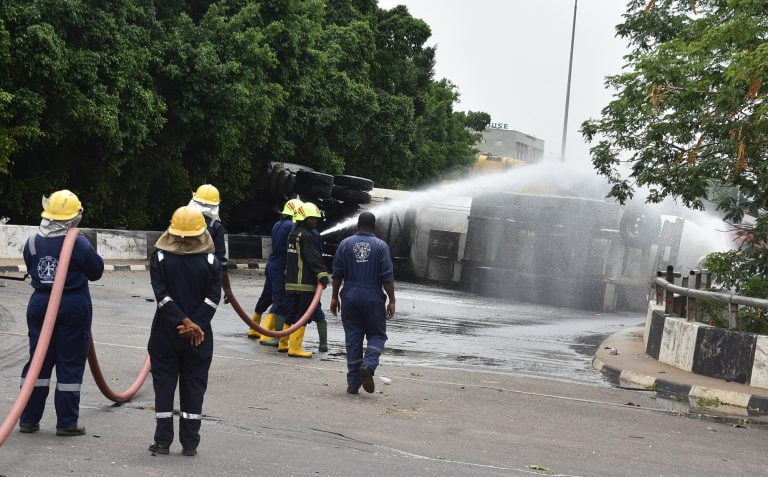 Two persons died on Wednesday while four others sustained various degrees of injury in a road accident involving a gas tanker truck and another vehicle at the Church Gate flyover, Olusegun Obasanjo Way, Central Area, Abuja.

Ochi said that the accident, which occurred at about 1:30am on Wednesday at the Constitution Avenue, Central Business District in Abuja and Olusegun Obasanjo Way intersection, was caused by speeding and loss of control.

He said: “A witness report reaching us indicates that the driver of the tanker laden with Liquefied Petroleum Gas (Cooking Gas) en route Abuja from Lagos, had a collision with a Golf car.

“A total of six persons were involved in the crash, comprising three in each of the vehicles.

“Four of them, including the driver of the tanker, sustained some degree of injuries and were taken to Wuse General Hospital by the FRSC rescue team from FCT Command.

“Two male adults, who were passengers in the gas tanker truck, were, however, confirmed dead and their bodies had been deposited at the mortuary.”

He said the obstruction on Olusegun Obasanjo way (from Garki to Wuse) and Constitution Avenue at Central Business District, linking Airport Road to Federal Secretariat had been cleared.

Ochi said it took the combined efforts of all the security and safety agencies to avert what would have resulted in a fire incident.

While condoling with families of the dead, Ochi warned motorists against speed limit violation.

He urged them to drive safely to avoid accidents and loss of lives.

Speaking, the Team leader of the Federal Fire Service, Wuse Command, FCT, Usman Hammed, explained that his office received a distressed call around 1:30am and quickly dispatched the team to attend to the situation.

Usman said the tanker fell off from its head when the driver lost control in his bid to avoid the car, adding that the gas-laden tanker was hanging on the retaining wall of the flyover.

He said the service deployed its machinery to avert an explosion.

Similarly, Frank Onuorah, Zonal Commander, City Operations, FCT Fire Service, said his team arrived at the scene of the accident around 1:30am and was able to put the situation under control to avert an explosion.

He said the scene of the accident, which was a stone throw to the NNPC Mega Station and two other filling stations, was cordoned off.

He said the service swung into action immediately and began to spray water mixed with chemicals to cool the tanker to avert an explosion.

Onuorah said the gas tanker that was already off its top was evacuated through the help of a crane to a safer location.

He said his team and others were at the scene for close to 13 hours before the road was cleared after the debris evacuated.

He said there was, however, a delay in the evacuation because of the fragile nature of the product, which was already leaking because of the impact of the accident.

Bitrus Samuel, Head, NEMA Abuja Operation, also commended all the agencies for the joint efforts to avert further damage, stressing that all put in their best for the success of the operation.