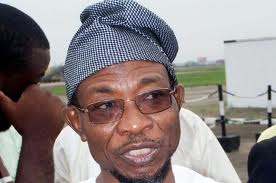 Seven persons accused of stealing a goat belonging to Governor Rauf Aregbesola of Osun State were on Monday arraigned before an Osogbo Magistrates’ Court on a two-count charge of conspiracy and stealing.
Those arraigned were Mohammed Moroof, 52; Ayeni Abiodun, 42; Agboola Fatai, 50; Fayinka Gbenga, 35; Olowoniyi Jeromu, 30; Babatunde Michael, 22; and Olorunfunmi Adeyemi, 27.
The police prosecutor, Inspector Abiodun Fagboyinbo, told the court that the accused persons conspired and committed the offence on May 15, 2013 at the Government House, GRA, Osogbo, the state capital.
Fagboyinbo said the accused persons stole a black he-goat valued at N8,500.
He said the offence committed was contrary to and punishable under Section 390(9) of the Criminal Code Cap 34 Vol.11 Laws of Osun, 2003.
The accused persons, however, pleaded not guilty to the charge.
Their counsel, Nnena Ngwu, applied for their bail.
Magistrate Habbibat Basiru granted each accused person bail in the sum of N50,000 and one surety in like sum.
Basiru added that each surety must reside within the jurisdiction of the court and must provide evidence of two years tax payment as well as two passport photographs.
The case was adjourned to June 5 for hearing.