Riots in South Africa over jailing of ex-President Zuma 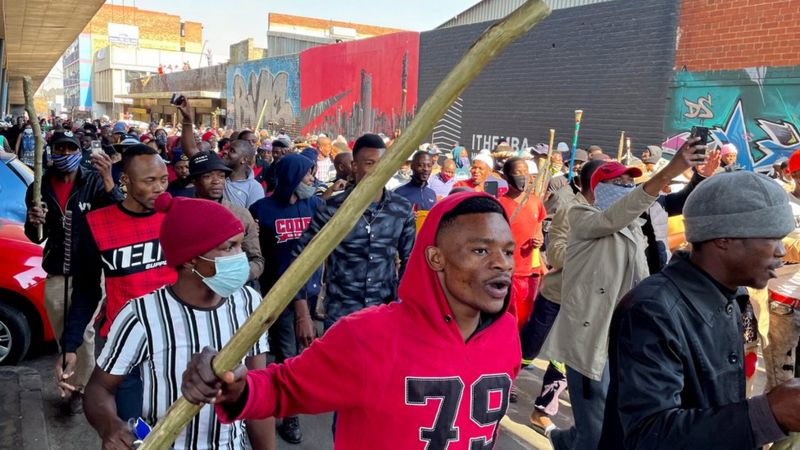 Share
Facebook Twitter LinkedIn Pinterest Email
Deadly riots are continuing in South Africa as jailed former President Jacob Zuma challenges his sentence at a hearing in the country’s top court.
Footage showed people looting shops and buildings set on fire.
Unrest began last week after Zuma handed himself in to begin a 15-month sentence. Several people have been killed and dozens arrested.
Zuma was convicted of contempt of court after failing to attend an inquiry into corruption during his presidency.
The 79-year-old, who denies corruption, is hoping to get his sentence rescinded or reduced at the Constitutional Court hearing. However, legal experts say his chances of success are slim.
The case has sparked an unprecedented legal drama in South Africa, which has never seen a former president jailed before.
Footage on Monday showed a fire at a shopping centre in Zuma’s home province of KwaZulu-Natal, and people rushing in to loot. A supermarket was also ransacked, according to reports.
Similar scenes were seen over the weekend, with violence spreading to the city of Johannesburg, in Gauteng province.
On Sunday, protesters armed with sticks, golf clubs and branches were seen marching through Johannesburg’s central business district.
A South African government intelligence body said six people had been killed and more than 200 arrested since the unrest began.
Four of the deaths were in Gauteng and two in KwaZulu-Natal.
Police in KwaZulu-Natal have accused looters of seeking to exploit the unrest.
The army announced on Monday that it was deploying troops to the two provinces to assist law enforcement agencies.
Meanwhile, President Cyril Ramaphosa has appealed for calm, saying that while people “may be hurt and angry” there is no justification for the violence.
Zuma was convicted of defying an instruction to give evidence at an inquiry into corruption during his nine years in power.
He has testified only once at the inquiry into what has become known as “state capture” – meaning the siphoning-off of state assets.
In a separate legal matter, he pleaded not guilty last month in a corruption trial involving a $5bn (£3bn) arms deal from the 1990s.
His supporters argue that he is the victim of a political witchhunt, orchestrated by Ramaphosa allies.
President Jacob Zuma Riots South Africa
Share. Facebook Twitter Pinterest LinkedIn Tumblr Email