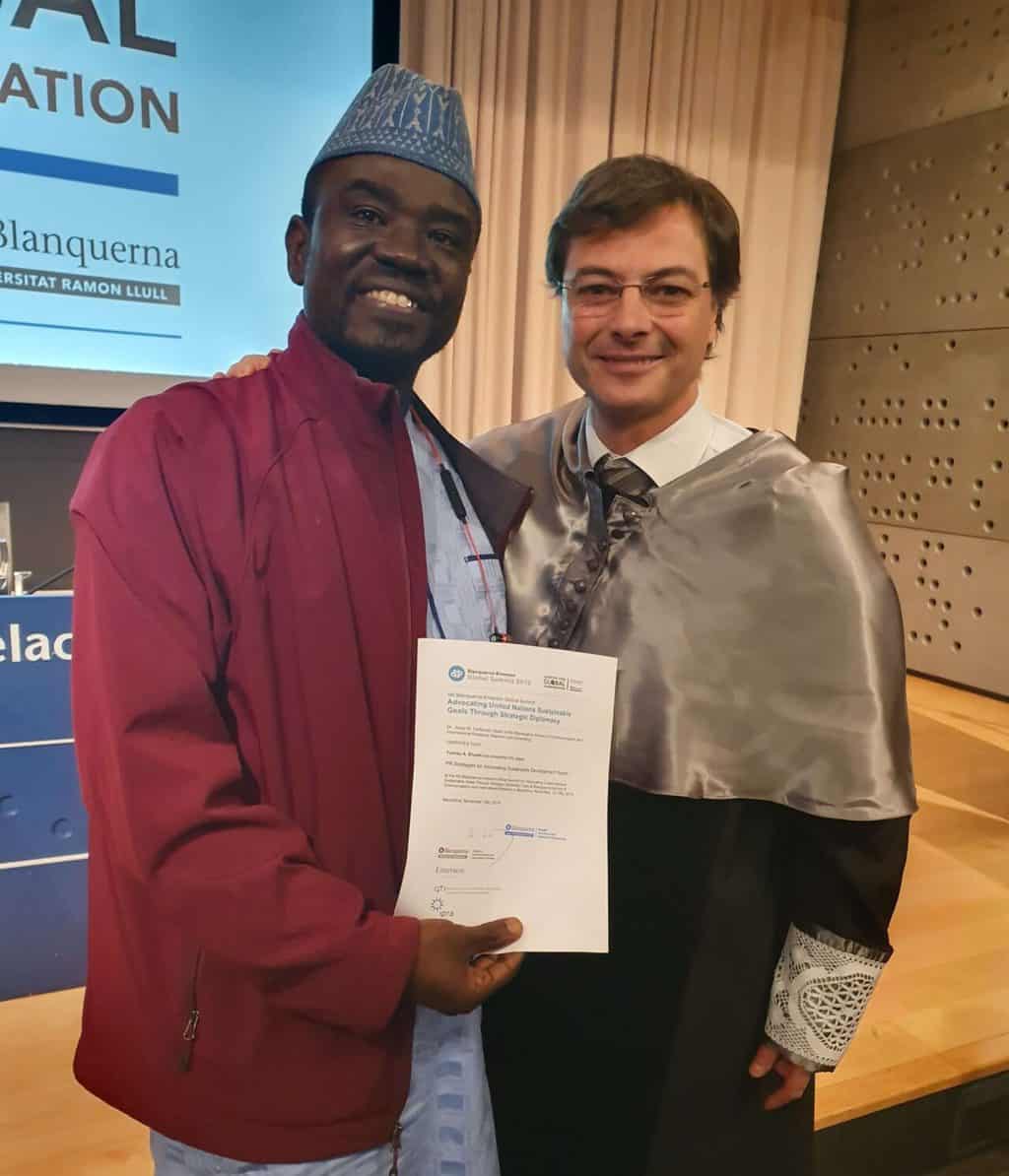 The 5th Blanquerna-Emerson Global Communication Summit on: “Advocating United Nation Sustainable Goals through Strategic Diplomacy,” has ended in Barcelona, Spain with a call for effective deployment of PR tools as key to advocating Sustainable Development Goals.
The Summit, which gathered leading communication scholars and professionals from Africa, Asia, Europe, North and South America, explored the global trends given by the United Nations Sustainable Development Goals in the field of Global Communication, Diplomacy and Politics
Speaking on Public Relations Strategies for SDG at the Global Summit, a renowned Nigerian crisis communicator, Yushau Shuaib, said that PR is deployed to mobilise supports, resources and facilitate developments.
Shuaib said: “Public relations is the deliberate, planned, and sustained effort for establishing and sustaining mutual relationship and understanding can be deployed to raise awareness, inspire greater ambition, and push for faster action on the SDGs, which were adopted by world leaders on 25 September 2015.
“Since SDGs are action plans for People, Planet, Partnership, Prosperity and Peace building, PR tools can be effectively channelled to achieve the goals through Media Relations techniques, Corporate Social Responsibility (CSR), Event Management, Crisis Communication and Facility Tours among others.”
Shuaib, who is the founder of PRNigeria and Economic Confidential, gave instances where communication strategies were effective in accomplishing campaign goals in Nigeria.
He said: “The media as an integral component of PR strategies served as outspoken channels in highlighting areas of concern from the community-based development projects for the attention of both the legislative and executive arms of government in taking appropriate actions.
“For instance, the reported rampant cases of Female Genital Mutilation (FGM) reduced from about 30% in 2012 to less than 17% in 2018 through the media advocacy that influenced collaborative actions of the legislature and the Presidency in banning of the practice in 2015.
“Similarly, we have seen increased philanthropic efforts and Corporate Social Responsibilities by organisations and individuals in providing succour to the less privilege and the poor in the society after media awareness campaigns. Just recently a total sum of N5bn (equivalent to $13mn) was donated by a Nigerian businessman, Femi Otedola to address the plight of children and displaced people in Northern Nigeria ravaged by activities of Boko Haram terrorists.”
Shuaib, who observed that some international and local organisations do not accord special recognition to the importance of communication and PR in their campaigns, asked them to do a rethink.
He said: “When the United Nations Secretary-General, António Guterres, appointed 17 eminent personalities across the globe as SDG advocates, including a Nigeria’s traditional ruler, Emir Sanusi Lamido Sanusi of Kano, the list excluded Communication Scholars, Media personalities and PR Practitioners.
“The array of political leaders, businessmen, entertainment celebrities, football stars and community leaders as SDGs Advocates can be influential to some extent, communicators are more important in advocacy and awareness creation campaigns than just celebrities.”
The Director of the Summit Dr. Enric Ordeix, said other speakers at the event examined and appraised SDGs focal areas of Reduced Inequality, Zero Hunger, Gender Equality, Good Health and Well-Being, Responsible Consumption and Production.
Ordeix added that the Emerson-Blanquerna Center for Global Communication was created to advance the dynamic academic partnership and foster collaborations in the field of global communication that develops education and research to promote critical thinking and ethical communication through International Relations, Political Communication, Strategic Diplomacy, Global Public Relations and Corporate Communication.
Another highlight of the occasion was the conferment of an honorary doctorate by Ramon Llull University (URL) on Dr. James Gregory Payne, an expert in public diplomacy and director of Communication Studies at Emerson College (Boston) Gregory Payne, who is one of the promoters of Blanquerna-Emerson Center for Global Communication.
Payne had worked as a communication consultant and speechwriter for the mayors of Los Angeles, Boston; former Secretary of State Hillary Clinton; and Saudi prince Faisal Al Said among others.
He is currently the Chair and Director of Communication Studies at Emerson College, Boston United States of America.