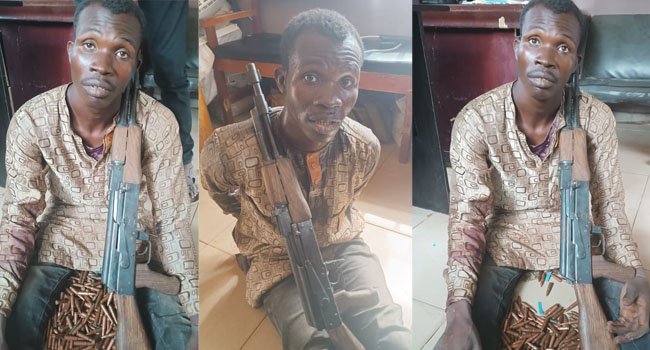 The Kaduna State Police Command has arrested a gun runner in Madachi area of Zaria town.

The Command’s spokesman, Muhammad Jalige, made this known in a statement issued in Kaduna on Wednesday.

Jalige stated that the arrest was made on Tuesday at Damari village of Birnin Gwari Local Government Area and that one AK47 rifle, 600 rounds of 7.62 X 39mm live ammunitions were recovered.

He explained that residents who saw the suspicious movement of the suspect alerted the police and that upon sighting police operatives, the suspect attempted to escape.

Jalige explained that a search carried out on the Volkswagen vehicle with Registration Number KNC 816 XC, with which the suspect was operating, led to the recovery of the rifle.

He said” “Upon further interrogation, the suspect led detectives to another location where an additional Volkswagen car with Registration Number AX 973 LGA was recovered.

“In it, operatives found the live ammunition carefully concealed inside the fuel tank to evade security operatives.”

He added that the police would not relent in ensuring that crime was reduced to the barest minimum.

Jalige also urged for more the support by the public in the area of information sharing, particularly on bandits’ informants.

“If the informants are dislodged, the bandits will be suffocated and will not have space to operate,” Jalige stressed.