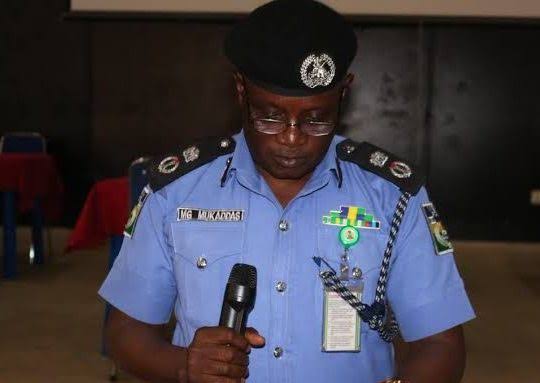 The Benue State Police Command on Friday said it has arrested a total of 33 suspected cultists and armed robbers.
This was contained in a statement personally signed by the State Commissioner of Police, Mukaddas Garba.
Garba explained that all the suspects were arrested between January and February, adding that arms and seven stolen vehicles were also recovered from them.
He said some of the suspects were already charged to court.
He said: “I want to use this medium to assure members of the pubic that the Command is working tirelessly to put the menace of cultism under total control and bring to book those who engaged in cult activities.
“I urge all stakeholders to avail the Police with necessary information to fight cultism in Benue.”
Garba said the Command on February 23 during a stop and search operation at North-Bank, Makurdi arrested a man with one locally made pistol, while further investigation led to the recovery of two small axes, one black beret and charms.
The Commissioner of Police said the Force got information about cult activities in Ugbokolo town in Okpokwu Local Government Area and Police teams were immediately deployed to the area.
He added: “During stop and search operations in the town, one suspect from Okonobo village in Okpokwu LGA, was intercepted and arrested along Ugbokolo market area. On the spot search led to the recovery of one locally made double barrel pistol.”
Garba said the command had on January 30 received information that armed robbers were operating along Shaahu Road, Gboko town and rushed to the scene.
He said the police upon investigation arrested five suspects, all from Gboko town.
He added: “Further interrogation and investigation led to the arrest of three others who are receivers and beneficiaries of robbery proceeds.
“Items recovered from the suspects included: two Toyota Corolla vehicles, one Honda Pilot Jeep, one Toyota Camry vehicle and two Honda Hennessey all suspected to be stolen vehicles.”
Garba further said the Command received information from a victim that her car, Toyota Corolla CE, was stolen from where she parked it inside Benue State University first campus, Makurdi.
He said: “During investigation, one suspect from of Akwanga, Nasarawa State and another residing at No. 4 behind Giza plaza, Keffi, Nasarawa state were arrested. The said stolen vehicle was recovered from New Keffi Hotel.”
The CP said the police on February 19 arrested a 300 level student of Benue State university, Makurdi in one of the school’s offices where he was alleged to have stolen a laptop and other stationery.