Police arrest 23 kidnap suspects with AK47 rifles, others in Adamawa 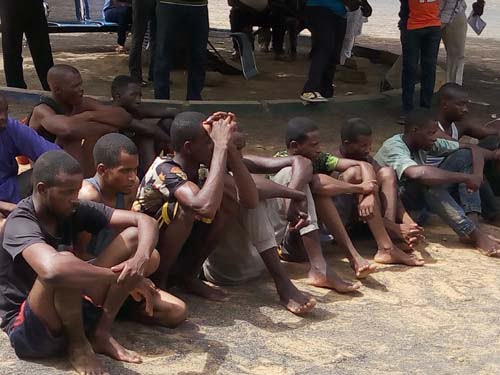 The Commissioner of Police in the state, Olugbenga Adeyanju, made the disclosure on Thursday when he paraded the suspects during his maiden press briefing with journalists in Yola, the state capital.

Adeyanju said recovered from the suspects were other firearms, including one fabricated Sub Machine Gun, two single barrel guns with 468 rounds of live ammunitions and 25 cartridges.

He said the suspects were the ones who some time in April 2020 allegedly conspired and kidnapped Ardo Kulda and Tela Bala of Guyaku and Golantabal villages in Gombi LGA and collected N4.5 million ransom.

He said hee was in the command to fight crime and criminality and that he is committed to weeding the state of criminal elements.

Adeyanju said: “In other to achieve this, I intend to Police the State in tandem with the creed of the IGP Mohammed Abubakar Adamu, the Inspector General of Police.

“But the Police cannot achieve much without the support of the community through information sharing, logistics support, adherence to the laws of the country.”