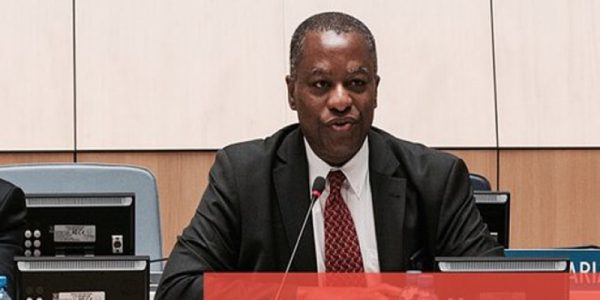 Federal Government and South Sudan have signed a cooperation agreement on oil and gas, trade, education, health, culture, technical among others.
Foreign Affairs Minister, Geoffrey Onyeama, signed on behalf of Nigeria while his counterpart from South Sudan, Nhial Deng Nhial signed for his country in Abuja on Thursday.
Onyeama said: “It is a general cooperation agreement that involves other areas but not security, the area of cooperation  include economic, education, technical, health, sports, culture among others.
“The agreement signed does not involve security and defence, we do not have any boot on ground in the place.
“It is just a guideline; there will be specific agreements between the Ministries, Department and Agencies of the two countries.”
The minister, who said that Nigeria had always being committed to peace and stability of South Sudan since its inception, said Nigeria would continue to support the country till permanent peace is installed.
He said: “We want to institutionalise our commitment and support to your country and we are signing a cooperation agreement, which we hope will be a framework that will enhance our deep relations.
“For us, we believe it will be a `win-win` for the two countries to have meaningful and profitable cooperation between us.”
He said that Nigeria’s involvement and engagement in South Sudan was deep because the two countries had a lot of things in common.
“Nigeria is part of group of countries called IGAD plus showing that with your country and the countries of IGAD are keen to have peace in South Sudan.
“We share a lot of things in common and a lot of potentials and that is why we want peace and stability to reign.
“Your country is rich in resources, in petrol and other resources and also human resources, and well educated people.
“We believe we can achieve greater things economically, socially and to really push for greater engagement between our two countries.”
He pledged Nigeria’s support to ensure peace and stability in the country, stressing that Nigeria would ensure the cantonment of the troops before the transition in the middle of the year.
Onyeama said: “We have identified areas to help which include the boundary resolution, the state creation and other issue, we are also helping in the cantonment and building of infrastructure.
“It is very important in peace building we are delighted at the political will being shown by the government and other leaders towards permanent peace in the country.”
According to him, this will help the country to focus on the development.
The visiting Minister commended Nigeria for the support given to his country through which peace and stability were being entrenched.
He pleaded for the support of Nigeria in ensuring permanent peace and stability in the country.
Nigeria’s effort toward the peace agreement was appreciated we are also grateful to a number of African countries that have been part of the peace agreement.
He said: “I welcome the cooperation agreement and share your sentiment on the cooperation between the two countries.
“We have a lot of difficulties and hardship; we have not had the degree of political stability that we like to see.
“And, indeed with the support of IGAD and Nigeria we have been able to reach another peace agreement that we are about to implement.”
He called for the assistance of Nigeria in the cantonment of the militia forces in the country. He said that the country was running out of time because by May new government is being expected.
Onyeama said: “The different armed groups need to be integrated into national arm forces into single unified national army before the transition period in May.
“That is very important because if you involved multiple armed group it can lead to another violent.”