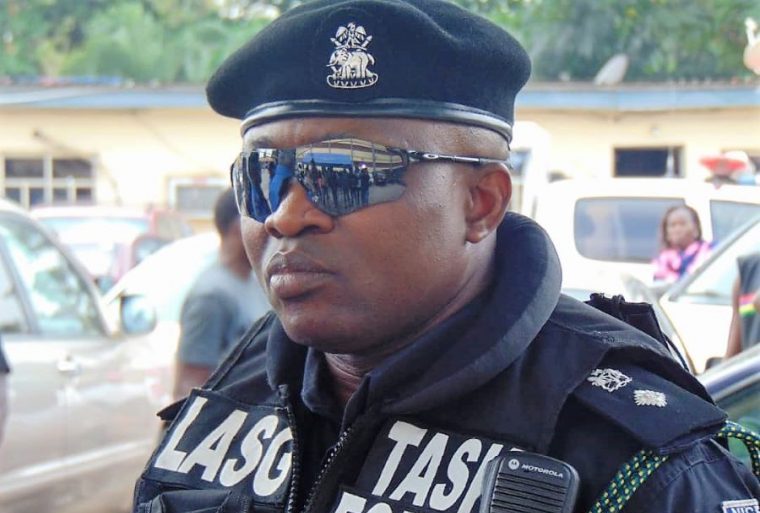 One Deputy Superintendent of Police, DSP Popoola Kayode, leader of task force team operating around Lekki Ajah area of Lagos State and his team members have been arrested for collecting N100,000 bribe.

The Lagos State Environmental and Special Offences (Enforcement) Unit (Taskforce), Head, Public Affairs Unit, Adebayo Taofiq said this in a statement on Sunday made available to newsmen in Lagos.

Taofiq said that the bribe was paid by one Didi Ekanem, the owner of a Toyota Venza with registration number: APP 775 GJ who was caught driving against traffic (one-way) around Lekki Ajah Expressway.

According to him, the statement was necessitated in response to a story published in Sunday Punch Newspaper, dated Nov.22, 2020 with caption “Taskforce Commander Made Sexual Advances At Me – Didi Ekanem”.

“The leader of the team, Kayode, is not the Commander of the agency as quoted in the report which said that the money (N100,000) was collected via bank transfer to his (Kayode) account.

“After the transfer, the vehicle was then released to Ekanem,” Taofiq said.

He said that the chairman of the agency, CSP Olayinka Egbeyemi upon investigation of the incident which happened on Wednesday, November18 immediately arrested Kayode and his team members.

“They will be sent back to the Lagos State Police Command for further disciplinary actions,” the unit head said.

He said that anyone caught would be charged to the Lagos State Mobile Court for prosecution.

“Members of the public should stop inducing our officers with money and be reminded that both the giver and receiver are liable in law.

“It is only court that pronounces traffic fines and money that will be paid into government purse,” Taofiq quoted Egbeyemi as saying.

Taofiq, however, urged members of the public to always report any corrupt officer who engaged in shady deals thereby spoiling the image of the agency for disciplinary actions.