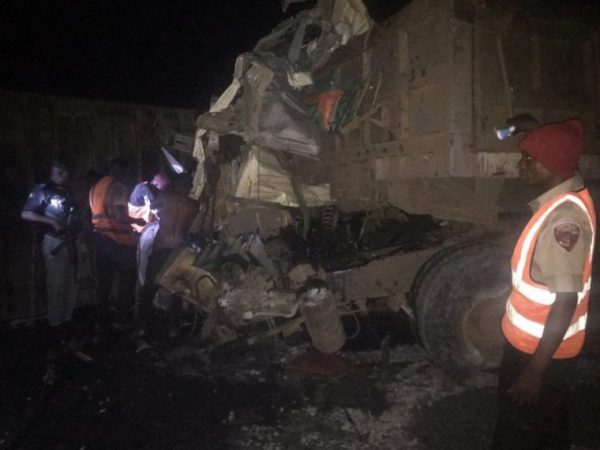 The Federal Road Safety Corps has confirmed the death of three persons in an early Wednesday multiple accident at Mile 12 Ogere on the Lagos-Ibadan expressway.

Umar noted that the accident, which occurred at 3.50am, involved an unregistered truck, another marked T4916 LA and a Nissan Micra car marked BDJ 257 XF.

The Sector Commander explained that the accident was caused by speeding and dangerous driving on the part of one of the truck drivers.

He added that one of the truck drivers was trying to negotiate a bend when the other truck, which was coming from Ibadan, rammed into it

He added: “Since the crash obstructed the road, the driver of the Micra car ran into it but was able to control his vehicle with little damage on the car.”

He noted that seven people were involved in the accident: one woman and six men.

Umar said that the remains of the deceased have been deposited at the FOS Morgue, Ipara.

“Traffic has been diverted and FRSC personnel are still on ground trying to manage the situation and ensure that the obstruction is moved from the road,” he said.

The FRSC boss warned on “dangers of excessive speed,” especially when visibility is poor.