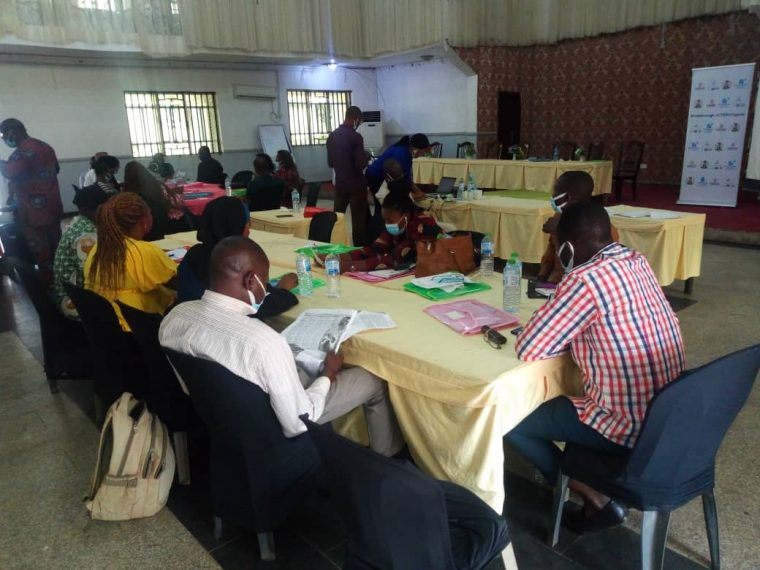 Share
Facebook Twitter LinkedIn Pinterest Email
In its bid to achieve greater result in its advocacy towards positive health behaviours in Ebonyi State, the Breakthrough Action-Nigeria has set up a 35-man Committee to drive its health programmes in the hinterlands.
The inauguration was part of its two-day Social and Behaviour Change Advocacy Orientation and Work plan Development Workshop held last week at the Osborne La Palm hotel, Abakaliki

The even was organised in collaboration with the office of the wife of the Governor of Ebonyi State.

The Committee, which was made up more of religious leaders, also has representatives of Traditional Rulers, Civil Society Organisations, government professionals and the Media among its membership.

Performing the inauguration on behalf of the Governor’s wife, the State Commissioner for Health, Daniel Umezurike, appreciated the Breakthrough Action-Nigeria for its great efforts towards achieving best practices in health matters, especially that of maternal and new born.

He noted that the wife of the Governor has been in the forefront of promoting the health and general wellbeing of mothers and their new born through her Pet Project, Family Succour and Upliftment Foundation, adding that the State Government has provided health facilities in all parts of the State.

He charged the Committee to be diligent in driving home the message of adherence to the priority social behaviour change for maternal and new born health.

Speaking on the essence of the Committee, the Advocacy Adviser for Breakthrough Action Nigeria, Alhaji Muktar Gaya, explained their job to includes mobilising and sensitising people against myths and misconceptions regarding some health issues within the communities.

He called on the State Government to leverage on the results achieved in the six focal local government areas of the Breakthrough Action project in the State to replicate achievement across the entire State.

“It is an initiative of USAID, a Breakthrough Action, Nigeria project where the community opinion leaders are put together to identify social and behaviour change related issues that mitigate the adoption of positive health behaviours.

“The Committee is a 35-member Committee made up of manly religious leaders.

“Seventeen out of the 35 members are religious leaders, three are traditional leaders, while the rest are made up of government professionals, Civil Society Organisation representatives and representatives of the media.

“The scope and what is expected of the committee is to ensure that they mobilise people, sensitise people, and also talk to people against myths and misconceptions regarding some health issues within the communities.

“For example, they are expected to mobilise women to ensure that they go for antenatal care once they are pregnant for a minimum of four times.

“The Committee is expected to mobilise women and also men to allow and support their women to deliver in government facilities or health facilities where there are trained  health workers.

“These are very essential.

The State Director of Public Health and Disease Control, Dr. Michael Urom, in an interview, bemoaned the high rate of maternal mortality in the State, attributing its cause to some harmful social behaviours such as poor antenatal care compliance, superstitions, among others.

He emphasised that the Advocacy Core group would work to end these preventable causes of maternal, infant and new born deaths.  .

Urom lamented: “Over the years we have high rate of maternal mortality and infant mortality.

“The importance of this is that we are forming a core group to fan advocacy as a way of reversing some of this preventable factors that are responsible in increasing number of Child deaths and maternal mortality.”

According to her, it is a five-year project geared towards improving the adoption of priority behaviours across maternal and child health including malaria, nutrition and pneumonia.

Ukoha-Nwankwo noted that the Breakthrough Action presently works in six Local government areas across the State, comprising Onicha, ohaozara, Ikwo, Izzi, Ishielu and Ebonyi, expressing optimism that the Committee was going to develop a work plan which they would judiciously implement to support the state have a very important maternal and child health outcome.