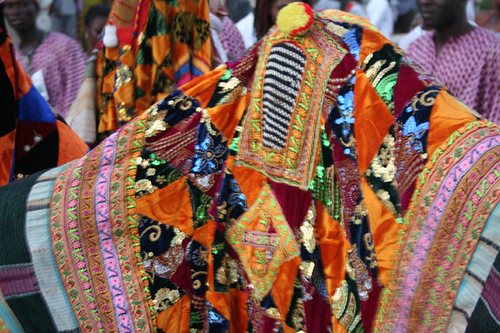 Many things are considered sacred in Africa, especially masquerades.

In some parts of Nigeria, it is a taboo to see the face of the person behind a masquerade as there are always a consequence attached to the action.

However, a masquerade has been seen in a viral video kneeling down with his hands raised to thank comedian, Mr Jollof, after he was given money.

The comedian, who apparently came for an event, was seen with the masquerade and his follower while they requested for money from him (Mr Jollof).

In response to their request, Mr Jollof reached out to a young man carrying bundles of different denominations of Nigerian currency who stood beside him.

After the masquerade was given the first bundle of N50 notes, he quickly went on his knees with his hands raised as a show of respect to the comedian.

Eventually, Jollof asked the masquerade to remove his mask and he willingly did without appearing to give it much thought.

While sharing the post on his Instagram page, the comedian explained that masquerades only ever flogged poor people.