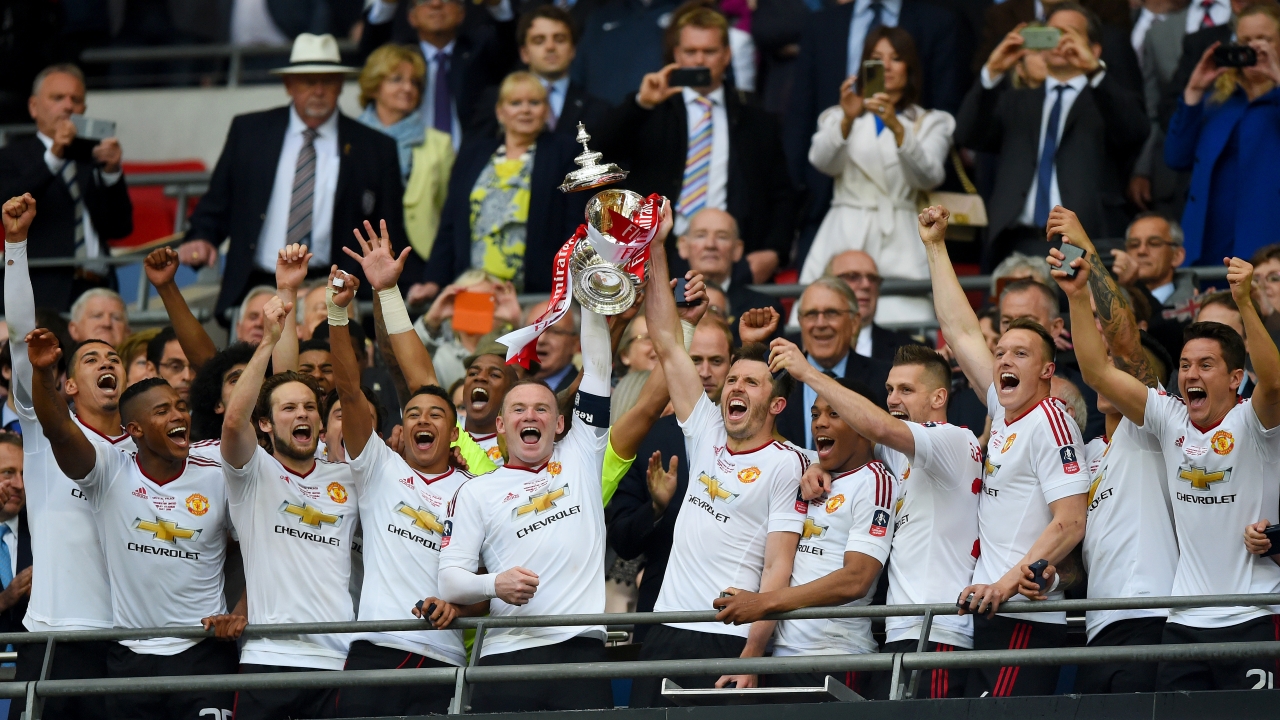 Jesse Lingard scored a memorable extra-time winner to fire Manchester United to their record-equalling 12th FA Cup crown at the expense of Crystal Palace on Saturday.
Juan Mata had earlier cancelled out Jason Puncheon’s opener at Wembley before the dramatic finale saw the Red Devils pick up their first major trophy since Sir Alex Ferguson left the club.
United’s first chance arrived after 11 minutes when Marouane Fellaini beat the close attentions of Mile Jedinak to reach the ball from a corner, only to glance his header wide of the target.
The main talking point of the first half arrived shortly afterwards, though, when referee Mark Clattenburg blew for a foul against Chris Smalling despite Connor Wickham having bounced straight back up and wanting an advantage as he broke through on goal.
Wickham proceeded to put the ball in the back of the net, but Clattenburg pulled play back for a free kick from which Yannick Bolasie flicked a header towards goal that needed to be tipped over by David de Gea.
At the other end, Palace’s sights of goals were being limited by United, with Bolasie drawing a stop from De Gea with a long-range strike moments before Wickham sent a 20-yard effort of his own wide.
Alan Pardew was left bemoaning a refereeing decision with 10 minutes left of the half when Wilfried Zaha robbed Daley Blind of possession and advanced into the area before going down under the challenge of a backtracking Rooney, only for Clattenburg to wave the penalty claims away.
The first half ended goalless, but United were inches away from breaking the deadlock eight minutes after the restart when Rashford flicked the ball through to Fellaini, who proceeded to power an effort against the post with Hennessey beaten.
There was a hint of an opening for Palace shortly afterwards when Yohan Cabaye’s was flicked on to the back post for Jedinak, but the Palace captain couldn’t control his half-volley and blazed it well off target.
Any thoughts from Van Gaal that it might not be his side’s day were increased with just 12 minutes remaining when Palace finally found the breakthrough, with Jason Puncheon lashing a finish past De Gea from a tight angle just six minutes after coming on as a sub.
Rooney created the chance by dancing his way into the right channel and hanging a cross up to the back post with Fellaini was able to chest down for Mata to volley past Ward on the line.
Both sides pushed for a winner to avoid extra time, and Palace had half a chance to get it when Pape Souare cross arrived to Zaha at the back post, but the former United winger failed to connect with his volley.
United suffered a setback in the final minute of the first half of extra time when Smalling became just the fourth player to be sent off in an FA Cup final, being shown a second yellow card for dragging down Bolasie.
Palace looked to make the most of their numerical advantage early in the second half of extra time, and United needed De Gea to deny Dwight Gayle after the striker had collected Zaha’s pass and poked one towards goal.
They would not have to wait much longer for the winner, though, and it arrived in spectacular fashion as Lingard lashed a ferocious first-time volley into the top corner after the ball had broken to him just inside the penalty area.