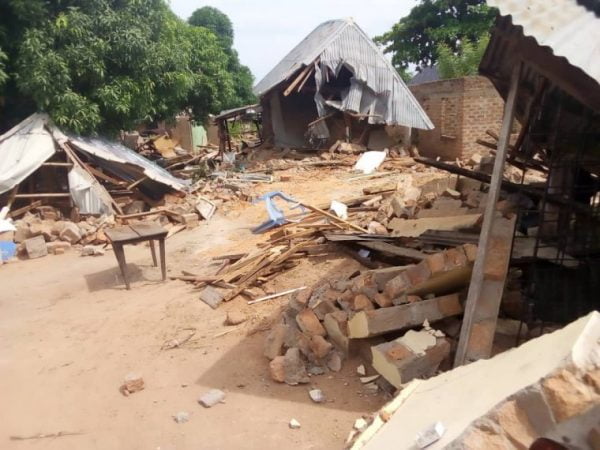 A human rights based Civil Society Organization in Nigeria, Lawyers Alert, has called on the Benue State Governor, Samuel Ortom, to investigate the demolition of some houses at Logo 1 area in Makurdi, Benue State.

In a press statement signed by its Director Programmes, Lazarus Ahangba, Lawyers Alert urged Ortom to investigate the remote and immediate circumstances surrounding the demolitions and the persons responsible for it.

Lawyers Alert said over 22 houses were demolished in Logo 1 area of Makurdi, the Benue State Capital and that the team that carried out the demolition refused to disclose their identity, the reason for the demolition of the properties and even did not allow the residents to retrieve their valuable.

It noted that heavily armed policemen from the Special Anti Robbery Squad accompanied the bulldozer and the people that demolished the houses.

According to the statement: “That fateful day, the residents of Logo 1, especially those living behind Midway Inn had a harrowing experience that has thrown their lives out of balance probably forever.

“Within hours, years and sweats of many men and women were reduced to rubbles. Houses were mowed with no time to retrieve valuables, women weeping and gnashing their teeth, agitated men going up and down seeking for answers to questions nobody was willing to answer.”

Lawyers Alert insisted that there must be plans to compensate and rehabilitate the victims, especially in these days of economic hardship caused by the COVID-19 global pandemic.

One of the affected residents, Mama Ayangeahungur Chellen, who is a widow, only stared at her home where she had lived for 39 years reduced to rubbles in less than 39 minutes.

Lawyers Alert said: “Mama Ayangehungur Chellen, a widow of 72 years who lived in the neighbourhood for 39 years, had her home demolished alongside many others. Mama Ayangehungur purchased her house since March 3, 1981. Throughout her 39 years of living on that land with her family, nobody has ever challenged her ownership of the property directly or indirectly.

“Officially, nobody informed her of any intended demolition in her neighbourhood let alone her home. Like a bolt out of the blue, the demolition men arrived accompanied by  armed policemen. They started destroying houses to her consternation as well as her neighbours. Anybody that attempts any form of resistance was either flogged away or arrested.

“The demolition men went ahead and pulled 2 of the 3 structures in the old widows as she cried and wailed without any help. The bulldozer turned to demolish the last of the building as well but Mama begged, cried and pleaded to be allowed a little time to find another home. They reluctantly agreed with a stern warning to evacuate the premises as they will return in 3 days time.

“As we speak, Mama Ayangehungur sleeps under a mango tree in the debris of what was once her home for 39 years. Mama’s story is same with other victims of the demolitions. The recurring issue here is most of the residents concur to the fact that nobody notified them of the demolition, nobody knew who ordered the demolition and the reason for the demolitions.”

Meanwhile, none of the victims is sure who ordered the demolitions and which of the Ministry’s Department or Agency of Government is responsible for the action.

According to the residents, some of the victims are staff of Urban development Board.

Curiously, no Government institution has claimed responsibility for this action, including Benue Urban development Board, Ministry of Land and Survey.