Joseph Ari, the Director-General, Industrial Training Fund, says Nigeria has a skills gap of 17.9 per cent in construction leading to many defects in buildings.
Ari was reacting to the Jos collapsed building on Monday evening at Dilimi Area of Jos North Local Government Area in Plateau, that claimed 14 lives with four injured. 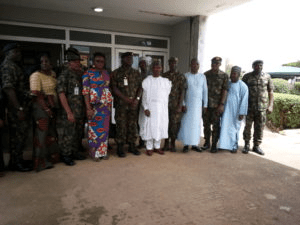 The director-general disclosed this on Wednesday in Jos during a courtesy visit by Maj.-Gen. Nuhu Agbanzo, the General Officer Commanding, 3rd Armoured Division, Jos, to the ITF Headquarters.
He said ITF in collaboration with the United Nations Industrial Development Organisation had conducted a survey on skill gaps in Nigeria, noting that jobs are available without requisite skills.
He said: “We have available jobs in Nigeria but no requisite skills for it. The construction jobs are being taken over by expatriates who exceed their one per cent quota as stipulated by the law.
“We should declare a state of emergency in skills acquisition in the country and call for more collaborations from organisations and state governments in training Nigerians on vocational and technical skills.”
The director-general congratulated the GOC for the peaceful conduct of elections in the state and promised to support him in motivating his personnel through training and empowering their family members on skills.
He said: “We will bring one of our ‘training on wheels’ van to the barracks to train housewives of army personnel on prolonged operations on skills and empower them with starter packs.
“We trained 200 Air force officers on mechatronics and autotronics through our Model Skills Training Centre in Abuja.”
Earlier in his remarks, Agbanzo said the visit was to seek support in developing its human capital especially for families of personnel on prolonged operations.
He said: “We want a unique synergy with ITF to assure our personnel of their welfare and their families in case of eventualities such as injuries and to empower both serving and out of service personnel with life skills to become self-sufficient.”