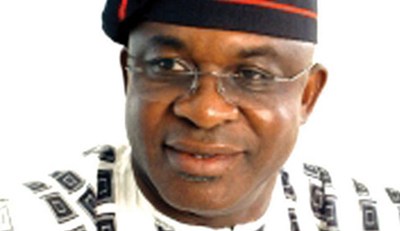 The Senate President, Senator David Mark, on Tuesday described the spirit of sportsmanship displayed by President Goodluck Jonathan over the outcome of the presidential election as the window that saved Nigeria from possible crisis and catastrophe.

Mark, in his welcome address to the senators, slammed doomsday prophets.

He said the outcomes of the elections had clearly disappointed doomsday prophets who predicted disaster and even a possible breakup of this country.

Mark in his words said: “I am happy to note that Nigerians harkened to our persistent appeals for a peaceful and violent free election.

“The outcomes of the elections has clearly disappointed doomsday prophets who predicted disaster and  even a possible breakup of this country.

“In this regard I will like to commend the maturity and sportsmanship disclosed by President Goodluck Ebele Jonathan who willingly  conceded defeat and congratulated the president elect, Gen Muhammadu Buhari, even before the Independent National Electoral Commission announced the result.

“That singular act saved us from a possible crisis and catastrophe.

“The president’s action added value to the consolidation of democracy in our land, it raised  the benchmark of peaceful democratic transition and consequently set a new democratic template in our continent, notorious for our infamous sit-tight leaders.

“I also extend my warm felicitation to the President-elect, Gen. Muhammadu Buhari. The president-elect has extended the hand of fellowship to President Jonathan and his team. He has also followed it up with his conciliatory statements that further reinforce  the unity and peace in our society.

“I  would  equally like to commend Nigerians for their comportment before during and after the elections. By this action, we have proved to the world that Nigeria has laid a solid foundation for democracy to thrive.

“In a special way, let me congratulate our colleagues, distinguished senators and Honourable members, who won their elections to return to the National Assembly. We are elected on different platforms to represent our constituents but in the National Assembly, we are united by the common good to legislate the good governance, peace and unity of Nigeria.”

He said: “I also wish to felicitate with our other compatriots who will be coming to the National assembly in the next dispensation. Let me in a similar manner congratulate our colleagues who won their elections as chief executives of state governments. I am sure they will miss this hallowed chambers and our activities when they resume their new positions. Specifically, Sen. Atiku Bagudu, Governor-elect for Kebbi State, Sen. Jibrilla Bindo , Governor-elect for  Adamawa State, Sen. Prof. Ben Ayade, Governor-elect for Cross River State, Sen. Ifeanyi Okowa, Governor-Elect for Delta State.”