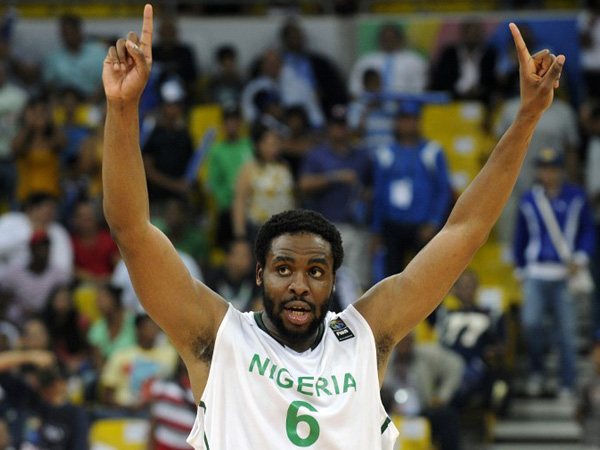 China-based, Ike Diogu, is to Captain the national basketball team, D’Tigers, to the upcoming 2018 Commonwealth Games in Gold Coast, Australia as the Nigeria Basketball Federation released its official team list.
The list which was compiled by the Coach, Alex Nwora-led technical crew, was made public on Wednesday by the NBBF secretary, Chimezie Asiegbu.
The team, made up of six home-based and six foreign-based players, will be captained by Diogu, who plies his trade with Henan in the Chinese league.
Diogu captained the team to a silver medal at the 2017 Afrobasket Championship in Tunisia.
He was also influential in the team’s run of 3 straight wins in the second window of the 2019 FIBA World Cup qualifiers with an average of 17.7 points made per game.
Azuoma Dike of Kano Pillars will be leading the home-based legion comprising teammates Abdul Yahaya and Dung Eli Abraham.
Mark Mentors of Abuja player, Musa Usman, will also be on the train to Australia.
Musa, who is one of the best ball rebounders in the Nigerian Premier League, re-joins the team after missing the World Cup qualifiers in Mali.
The duo of Abdulwahab Yakubu and Istifanus Sylvanus who played major roles in Gombe Bulls’ first ever qualification for the FIBA Africa club championship in 2017, also made the final cut.
After a sterling performance for Stony Brooks in the 2016 to 2017 NCAA season, Uchenna Ireogbu will be making his national team debut for Nigeria in Australia.
Prince Ifeanyi Orizu plying his trade with the Far Eastern University, Philipines also made the Commonwealth Games team.
The trio of Olalekan Graham Olantunji, Ofoegbu Uchechi Chima and Godsgift Achiuwa Onyekachi will also be joining the team in Australia from their base in the U.S.
The News Agency of Nigeria reports that pre-games camping is expected to end on March 22 and the team will depart for Brisbane on March 23 ahead of their first game against New Zealand on Friday, April 6.
Nigeria is in Group B alongside host Australia, New Zealand and Canada.
Coach Nwora will be assisted by Aderemi Adewunmi and Mohammed Abdulrahman.