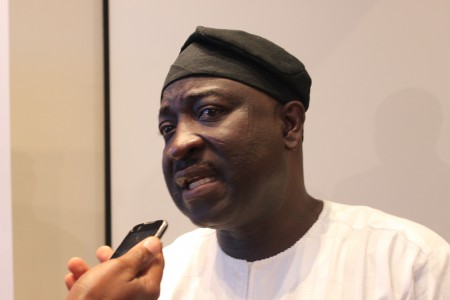 Share
Facebook Twitter LinkedIn Pinterest Email
Godfrey Gaya, a former lawmaker, has urged the Nigeria Football Federation to ensure disciplinary measures are taken against erring officials following FIFA’s sanction on Nigeria for using an ineligible player.
The News Agency of Nigeria reports that FIFA had on Tuesday said NFF was to pay a fine of 6,000 Swiss Francs for fielding an ineligible Shehu Abdullahi against Algeria.
The November 10 match in Constantine was a Russia 2018 World Cup qualifying fixture, and it had ended 1-1.
The Super Eagles defender, Abdullahi Shehu, was to serve the automatic one-match suspension as a result of receiving a caution in two separate matches of the same competition.
Gaya, who was a former Chairman of the House of Representatives’ Committee on Sports, however told NAN on Wednesday in Abuja that the development was embarrassing.
He said whoever was responsible should be sanctioned.
He said: “This has happened repeatedly in NFF and sanctions have not been applied.
“It was said that FIFA informed NFF prior to the situation, but it did not take it into consideration.
“That match against Algeria was inconsequential and we could have even filed players that had not featured at all in any of the qualifiers.
“If we had not qualified before that match we would have lost our chance at the World Cup, in addition to the sanction.
“We are supposed to be participating at the World Cup with our heads high, but now it appears as though we are not capable of running our football well or keeping records.”
The former House Committee chairman blamed the NFF General Secretary, Mohammed Sanusi, for the negligence.
Gaya said: “The General Secretary should know that this is his duty as number one administrator and the chief executive officer of the NFF.
“If the letter which FIFA sent was not worked upon then that responsibility rests on his shoulders.”
Algeria Godfrey Gaya Nigeria Football Federation Shehu Abdullahi
Share. Facebook Twitter Pinterest LinkedIn Tumblr Email