by The Eagle Online
in Featured, R&D Health
3 min read
0

Scores of practitioners of Female Genital Mutilation in Ikole Local Government area of Ekiti State on Monday surrendered their instruments to the Wife of the Governor, Erelu Bisi Fayemi, with a promise not to return to the practice considered as dangerous to the lives of women.
The repentant FGM Practitioners, mostly women, also signed a legal agreement with the State Government not to return to the widely acclaimed outdated practice.
The development came as the First Lady commenced her community engagement and advocacy tour of the 16 local government areas of the state.
Enlightenment campaigns against genital mutilation, gender-based violence, sex abuse were some of the highlights of the advocacy tour, which also featured empowerment packages for women and the elderly citizens.
Erelu Fayemi, who praised the women for renouncing the obsolete practice of genital mutilation, said the state government is determined to step up its war against rape, FGM, child slavery and open defecation that have constituted a national shame to the state.
Fayemi, who lamented that Ekiti was ranked first in open defecation and third in female genital mutilation practices in the country, urged the FMG practitioners who were prepared to dump the practice to surrender their instruments in exchange for viable empowered package from the state government.
Several women who were practitioners of FMG came out and renounced the practice.
They also surrendered their tools to the Wife of the Governor, who got them registered for government’s empowerment programme.
Speaking further, Fayemi, who praised the repentant practitioners of FMG for denouncing the practice, insisted that rapists and those obstructing justice in the trials of sex offenders will continue to face the wrath of the law under the Governor Kayode Fayemi-led administration through diligent prosecution and conviction.
The First Lady said she embarked on the tour to engage the communities on their problems and to make advocacy on the need to stop the menaces of FGM, open defecation, domestic violence against women, child trafficking and rape, that have become rampant in the society .
She said it was shameful for Ekiti to be leading in Female Genital Mutilation and open defecation in the country, saying such odious practices must stop.
She said: “It is a shameful thing for Ekiti to be ranked third in female genital mutilation.
“This is unacceptable to us.
“In open defecation, Ekiti came first in Nigeria.
“Let us stop the practice because it endangers our lives.
“The government will soon provide toilet facilities across the state.”
The First Lady said as part of her contribution to Governor Fayemi’s Social Security for the elderly billed to commence next month, she has added another programme called” “Food for the Elderly (Ounje Arugbo),” adding that a total 1,000 elderly citizens will benefit from the programme monthly.
She said: “The essence of this tour is to engage in advocacy because we need to pay more attention to the health of our women.
“Those who are of child bearing age should go to hospital for medical care.
“Ten thousand delivery packs (Mama Kit) have been provided, which will be distributed to pregnant women.
“The issue of gender violence is also of concern to us.
“Please, husbands, don’t beat your wives.
“If you are being beaten by your husbands, please report to the nearest police station because we have a law that prohibited that.
“Don’t wait until you are killed.
“If someone defiles any child and you come to beg, the person will be treated as an accomplice.”
The Commissioner for Women Affairs, Mojisola Fafure, said the empowerment and advocacy visit was an indication that Governor Fayemi was passionate about issues that affect women.
Materials distributed at the event held in the two councils included: cash, grinding machines, sewing machines, hair dryers, cooking gas, Coolers and raw foods to the elderly (Onje Arugbo). 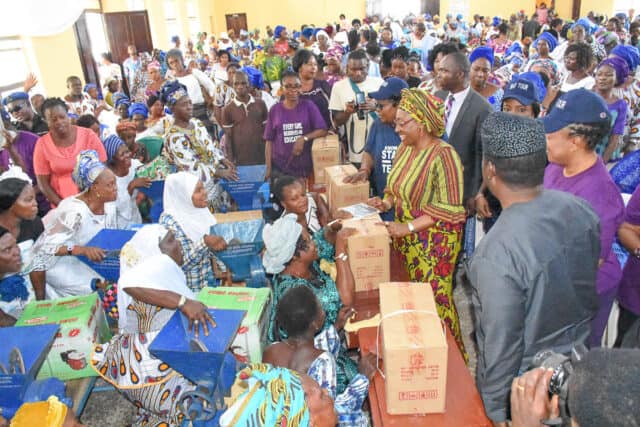 Jonathan commiserates with Chadians over death of President Derby