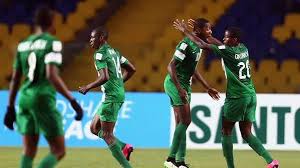 Golden Eaglets’ striker, Orji Okonkwo, has described his 35-yard screamer, which fetched the second goal for Nigeria in the 4-2 defeat of Mexico in the semi finals of the FIFA U-17 World Cup, as his best ever.
Okonkwo had played minor part in the tournament until fate thrust him into the fray, as replacement for Funsho Bamgboye, who was suspended after two yellow cards.
The boy grabbed the bull by the horns to score what is known in Nigerian football parlance as intercontinental ballistic missile.
“I have never scored a goal like this before and you cannot practice this kind of goal,” admitted Okwonkwo, the first boy in a family with six other children. “The goal I scored against Mexico today is a wonderful goal and I’m dedicating the goal to my mum who has been there for me; challenging me to be the best.
“My dad died last year; I remember him too, but it is my mum that has been there for me all this while. I thank her so much.”
Okonkwo is one of the team’s pacesetter performers who scored thrice, including a goal against Mali on April 21, 2014, at the sub-regional West African Football Union B Tournament in Togo where the Golden Eaglets finished third behind Benin and Togo.
Over 21,000 spectators, including the President of the Nigeria Football Federation, Amaju Pinnick, saw Okonkwo’s top-of-the-drawer goal.
But there was another person on his mind when his lively shot sailed into the net: Emmanuel Amuneke.
“Today, I want to thank Coach Emmanuel Amuneke for pushing me so hard,” said the player, who was sanctioned and kept out of the squad for months prior to the African U-17 Championship in Niger Republic.
He continued: “He is a nice person who wants the best for us. Before the match, he called me and said: ‘Orji, this is your chance, you can’t afford to let yourself and Nigerians down.’ And when I scored, I kept saying: ‘Coach, coach, coach.’ I’m grateful to him.”
Okonkwo is two-time winner of the annual Karanka Reveria Invitational Tournament in Croatia in 2013 and 2015, with the Abuja Football College.