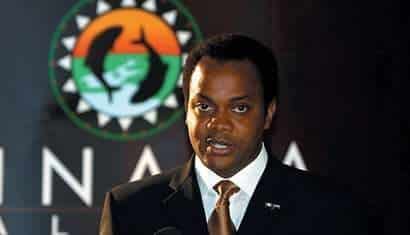 Share
Facebook Twitter LinkedIn Pinterest Email
A former Governor of Cross River State, Donald Duke, has decried the declining level of manufacturing in Nigeria.
Duke said this at a keynote address at the Annual Distinguished Lecture of the Nigerian Institution of Civil Engineers organised in honour of Rev. Ette Ette, a veteran Civil Engineer, on Tuesday in Abuja.
He said western countries awarded contracts to their firms to grow their economies and create jobs while the reverse was the case in Nigeria.
Duke regretted that Nigeria’s huge population had not been exploited to productive advantage for the country and its peoples.
He lamented: “In the US, Europe, China, they give contracts to their own people. We cannot continue contracting our own jobs to foreigners.
“We have to make the mistakes and correct the mistakes; otherwise we will not pass anything to the next generation.
“It cannot be theory every time; it will be a thing of pride that we build our country not others building it for us.
“We are not going to find the answers within the budgetary level because our budget is shrinking and our population is growing.
“If you buy a product, you have transferred the technology; if we get our act together, we find out how it works and we build it; when you assemble, you create jobs and transfer technology.’’
The former governor said that a proposal which stipulated that all household equipment be assembled in Nigeria had yet to come to fruition.
According to Duke, Nigeria has over 20 million housing deficit which can keep a lot of engineers busy because of its value chain of plumbing, piping, roofing among others.
He said that it was high time the stakeholders take drastic action to address the anomaly instead of amassing wealth.
Earlier in his opening address, Andem Ekpo-Bassey, NICE’s National Chairman, said that the essence of the event was to celebrate Etteh for his contributions to civil engineering in Nigeria.
He said that Etteh was a detribalised Nigerian who mentored a lot of civil engineers across the country.
Ekpo-Bassey added that another reason for the lecture was to create a forum where engineers were lectured by experts in other fields where they were not knowledgeable.
In his remark, Otis Anyaeji, Presdient, Nigerian Society of Engineers, said that he had confidence in the ability of the local engineers to deliver when given contracts.
Anyaeji said: “The problem is that the country never made the policy choice of empowering Nigerian firms; they hide under the smokescreen of quality, confidence and outsourced most activities to foreign engineering firms.
“However, it is gladdening to not that some months ago the Federal Executive Council took a decision by saying that from now on, Nigerian firms would be used for projects going on in Nigeria.
“We are waiting for the executive order to deal with this from office of the Attorney-General of the Federation.”
Cross River State Donald Duke Rev. Ette Ette
Share. Facebook Twitter Pinterest LinkedIn Tumblr Email