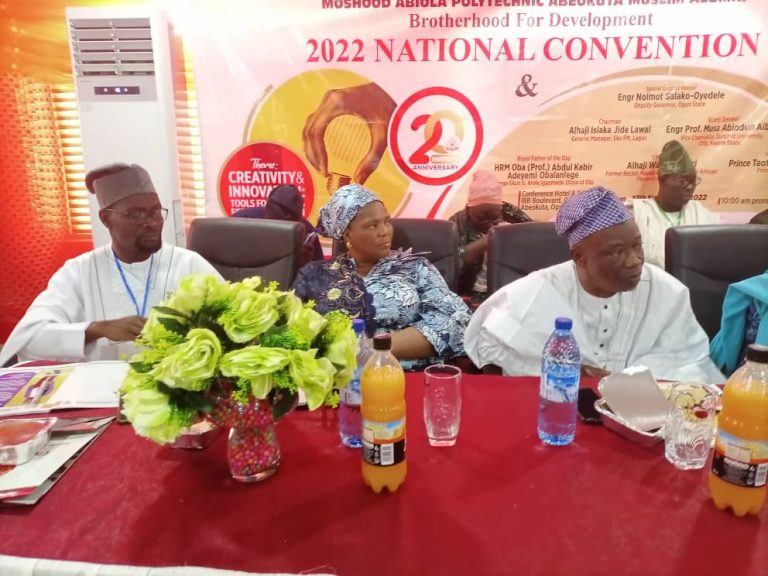 For Nigeria to resolve her economic crises and attain an enviable developmental status, there is an urgent need for “Acado-Industrial” – synergy between academia and Industry.

Aibinu, who is the Vice Chancellor of Summit University, Offa, Kwara State, North Central Nigeria, while delivering lecture on the Convention theme: “Creativity and Innovation: Tools For Solving Economic Crises In Nigeria”, affirmed that the synergy being advocated for, would accelerate success in business; showcase unique qualities; sustain democratic dispensation as well as achieve sustainable development goal.

The Don who was represented by Sub Dean, School of Engineering, Yaba College of Technology, YABATECH, Dr Mos’ud Taiwo Ajala, lamented that there were over 21 million unemployed young people in Nigeria, aged between 15 and 34 – the  highest unemployment rate.

Prof. Aibinu lamented that Nigeria was ranked 114 out of 132 in the global innovation ranking, noting that the disturbing trend was a proof that the outputs from several agencies, responsible for promoting innovation and creativity in the country has not yielded significant result.

He asserted that with creativity and innovation, the challenges of unemployment and employability among over 2.9 million Nigerian graduates and post-graduates would be  addressed substantially and resolved appreciatively.

Prof. Aibinu also promoted  “Acadopreneurship” concept, as one of the tools to encourage creativity and Innovation for a prosperous economy and future.

He described the term as  “turning academic idea and research outputs into viable business and start up ventures, affirming that it could be achieved through collaboration and integration between the academia, regulators, government and  industry experts.

Aibinu who described innovation as the process of gathering and application of creative ideas, indicated that innovation involved three levels and these include: adoption; adaptation and inception.

Speaking in an interview, a former Rector of Moshood Abiola Polytechnic MAPOLY, and MAPAMA Board of Trustees BOT Chairman, Tpl. Waheed Kadiri, FNITP said creativity was not absolutely about new thing, but about finding new ways of doing the same thing.

“The essence of creativity is about creating new thing, but it goes beyond that, rather, about finding easier, cheaper ways of doing the same thing if you cannot create new thing”, Tpl. Kadiri restated.

The former Rector advised Nigerian youths to always appreciate what is good, get involved in them and avoid unlawful acts.

Earlier, MAPAMA National President, Prince Taofeek Oyeniyi in his welcome address, said the organisation, by the choice of the Convention’s theme “…seeks to generate great ideas that will further unleash our potential and how to further translate our numerous creative ideas into a viable solution…”

He added that the theme would help to ignite innovative ideas which are increasingly required for excellence in today’s ever-changing world.

He announced that three corporate organisations and 17 eminent members would be conferred with an Award of Excellence, congratulating the awardees and urging them not to relent in their support to the association.

The new National Executive Council NEC members have since been sworn-in to the office.