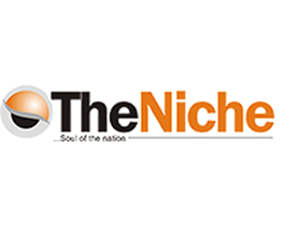 Share
Facebook Twitter LinkedIn Pinterest Email
TheNiche newspaper, published by Acclaim Communications Limited, will be commemorating its 4th Anniversary on April 20, 2018 with a Special Lecture hinged on the anniversary topic: “Development Reporting and Hysteria Journalism in Nigeria.”
The event will be taking place at the Main Auditorium of the Nigerian Institute of International Affairs, Victoria Island, Lagos, at 10am.
A presidential hopeful, erudite scholar, public affairs commentator, author and erstwhile Deputy Governor of the Central Bank of Nigeria, Prof. Kingsley Moghalu, will deliver the anniversary lecture.
The 2015 KOWA Party presidential candidate, prolific writer and a university don, Prof. Remi Sonaiya, will be the chairman of the occasion.
A team of professionals versed in economy, politics, media, academia and civil society has also been assembled to dissect the topic in a manner that will place Nigeria of our dream on sound development footing through the media.
The discussants include Prof. Fred Aja Agwu, a senior researcher at the NIIA, who is also a journalist, author and international affairs expert.
Others are Funke Egbemode, Managing Director, New Telegraph Newspaper and President of the Nigerian Guild of Editors; Obinna Nwosu, former Group Deputy Managing Director of Access Bank and a development expert; Edetaen Ojo, Executive Director of Media Rights Agenda and former Judicial Editor of The Guardian; Kola Ologbodiyan, National Publicity Secretary of the Peoples Democratic Party and a former Editor with THISDAY newspapers; and Chief Joe Igbokwe, Lagos State Publicity Secretary of the All Progressives Congress, who is also a publisher and public affairs commentator.
The highpoint of the anniversary will be the unveiling of TheNiche Foundation for Development Journalism.
Dignitaries expected at the event include the Senate President, Dr. Abubakar Bukola Saraki; his deputy, Ike Ekweremadu; and a host of others from the public and private sector, as well as from the civil society community.
Acclaim Communications Limited Hysteria Journalism Kingsley Moghalu TheNiche Newspaper Victoria Island
Share. Facebook Twitter Pinterest LinkedIn Tumblr Email