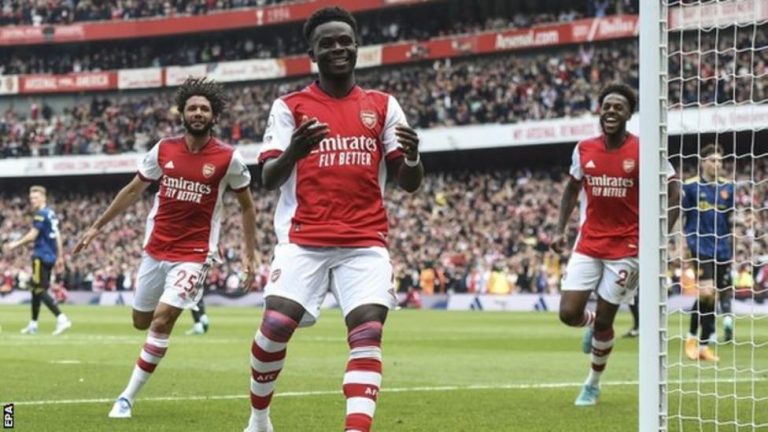 Arsenal attacker Bukayo Saka has broken a Premier League penalty record after netting from the spot in Saturday’s 3-1 win at Manchester United.

In a bizarre turn of events, Eddie Nketiah put the ball in the back of the net from an offside position, but play was brought back after Alex Telles felled Saka in the area.

The 20-year-old stepped up to convert the spot kick only a few days after netting from 12 yards against Chelsea – further banishing his Euro 2020 penalty woes.

Having scored consecutive penalties in back-to-back Premier League games at the age of 20 years and 230 days, Saka is now the youngest player to ever achieve such a feat in the competition.

Nuno Tavares and Granit Xhaka were also on target for the Gunners, who rode their luck as Bruno Fernandes missed a penalty of his own after Cristiano Ronaldo’s response.

Arsenal have temporarily moved back into the top four of the Premier League table before Tottenham Hotspur take on Brentford later on Saturday.