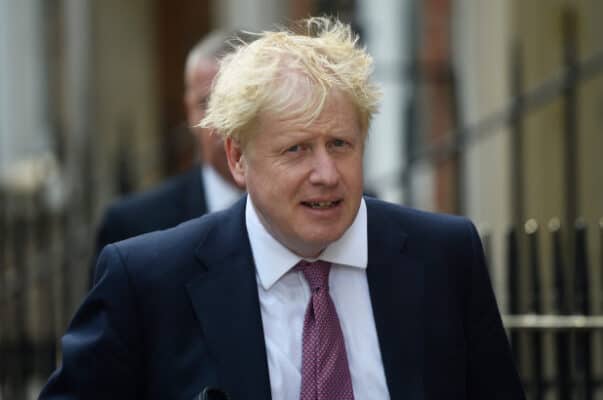 British Prime Minister, Boris Johnson is due in Paris on Thursday to meet President Emmanuel Macron as he campaigns for the European Union to drop its insistence on a guarantee that Brexit should not lead to a hard border in Ireland.
Johnson will be heading to Paris the day after a meeting in Berlin with German Chancellor Angela Merkel where he pushed for the so-called “backstop” guarantee to be removed from the withdrawal agreement his predecessor Theresa May reached with the bloc.
Merkel and Johnson both said they were committed to Britain leaving the EU with a negotiated deal.
The EU has consistently said that the withdrawal agreement negotiated by May, but repeatedly rejected by the British parliament, is not up for renegotiation.
Macron has long been seen as a hardliner on Brexit issues, with French officials saying that Britain’s departure cannot be allowed to take up all the bloc’s energy.
The EU and the Irish government have insisted on the backstop to guarantee an open border between Northern Ireland – part of the UK – and the Republic of Ireland, an EU member state.
They say it is needed to shore up a 1998 peace agreement that ended almost 30 years of civil strife in Northern Ireland, where many in the Catholic minority still favour unification with Republic.
Macron’s lunch with Johnson is only one of three diplomatic engagements on Thursday as he returns from its summer break.
Macron is also due to meet Greek Prime Minister, Kyriakos Mitsotakis and Indian premier Narendra Modi later in the day.