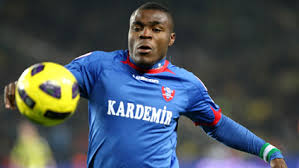 Emmanuel Amuneke, Golden Eaglets’ assistant coach, would round off his UEFA Pro Licence coaching course on July 19 in time to join his colleagues for the next phase of the National Under-17 team’s preparation for the 2013 World Cup in the UAE.
The former African Footballer of the Year, who could not be part of the Golden Eaglets’ screening exercise for new players at the NFF/FIFA Goal Project in Abuja, said the course, conducted under the auspices of the European football governing body, UEFA, and the Spanish Football Federation, is refreshingly different and challenging.
It was learnt that the UEFA Pro Licence is the final coaching qualification available after the completion of the UEFA ‘B’ and ‘A’ Licences.
It is required by anyone who wishes to manage a football club in the top level of any nation’s league system on a permanent basis.
“I have been following the screening exercise despite the fact that I was not physically on ground as a result of the UEFA Pro Licence course I’m doing here in Spain,” Amuneke said. “I’m so happy to be part of the course since it would enhance my job and I’m really looking forward to joining my colleagues to prepare the Golden Eaglets for the World Cup.”
Meanwhile, Amuneke is still basking in the euphoria of the success of his soccer academy at the recently concluded Iber Tournament at the Estadio Estoril in Portugal where they defeated defending champions Chivas Guadalajara of Mexico 4-2 on penalties after a goalless draw, even as he prayed for mother luck to shine on the Golden Eaglets at
the FIFA Under-17 World Cup.
“Of course, we are looking forward to a good outing at the World Cup and what we need is just luck after all the hard work over the last one year,” stated the former FC Barcelona’s striker.