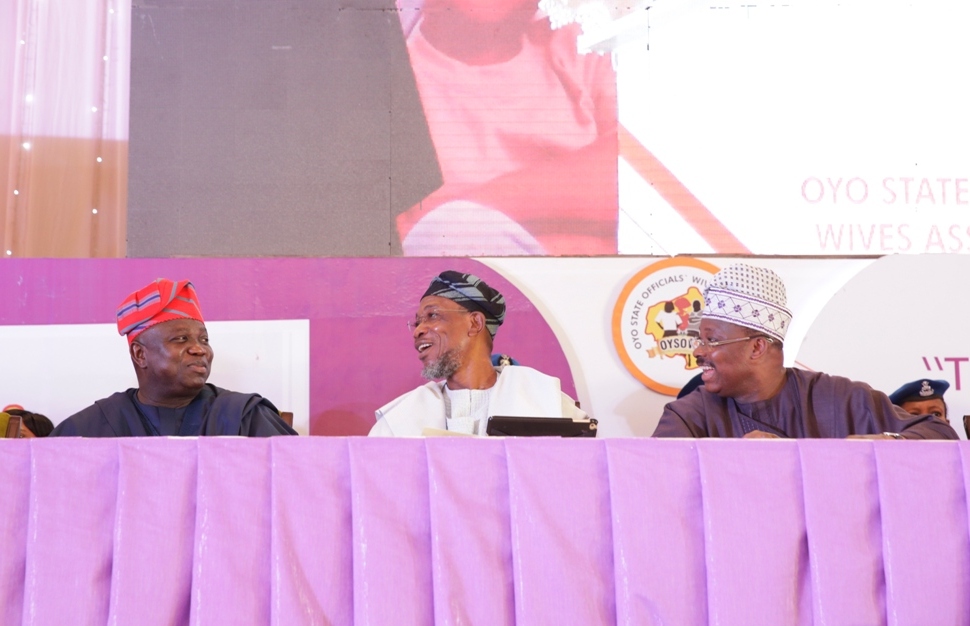 The Lagos State Governor, Akinwunmi Ambode, his counterparts in Oyo and Osun States, Senator Abiola Ajimobi and Ogbeni Rauf Aregbesola, on Wednesday made a case for huge economic empowerment for women and eradication of female genital mutilation.
The Governors, who spoke in Ibadan at the opening ceremony of the National Women Conference of the Oyo State Officials’ Wives Association, with the theme: “The Ultimate Woman At A Time Like This,” said there was a great need for women to be supported more than ever before, especially at this current time of economic recession.
While alluding to the aptness of the theme of the conference, Governor Ambode said the current economic situation had no doubt caused serious challenge on the managerial acumen of women, but that the men and the society must give them the necessary support to mitigate the impact of the economic realities of the moment.
He said: “A time like this does not know the difference between men and women but women are known to be more resilient, more spiritual, more ready to face and succeed in difficult situations.
“Women are like magicians because they always make something out of nothing. Even when there is no increase in the money for family upkeep, women are expected to “do something” notwithstanding the inflationary trend that has jerked prices above and beyond the level that we could have all imagined.”
Governor Ambode, who recalled a famous quote by a former American First Lady, Eleanor Roosevelt, which described women as tea bag that shows its strong nature when in hot water, said women are known to always show resilience, inner strength and ability to rise up to challenges of difficult times.
He expressed optimism that the current period would not be an exception.
He added: “Our women have always lived up to expectation and I believe this time will not be an exception. What they require from us, which I believe we are trying to do, is our support so that the water does not become too hot for convenience.
“On behalf of myself and brother Governors present, I assure all our women here that we would remain committed to this objectives and shield you from the troubles of the world.”
Besides, Governor Ambode thanked the wife of Oyo State Governor, Florence Ajimobi, for the support and contribution towards the success of the recently concluded National Women Conference organized by the Committee of Wives of Lagos State Officials.
The Governor particularly commended the Oyo First Lady for having the courage to recognise the goodness in the idea of COWLSO and adapting it for the benefit of the women in Oyo State.
On his part, Governor Aregbesola emphasized the importance of the role of women in the society, saying that the future of any society depends largely on the qualities of women in such society, and as such men must develop capacity for development of women.
He said: “I demand from all government to have huge programme for development of women. We must develop and organise programmes to make women to be economically viable and independent.”
Governor Aregbesola also advocated strongly for the eradication of female genital mutilation, saying that the practice was barbaric and ungodly.
Corroborating the two Governors, Governor Ajimobi said women have always played profound roles in the home front and the nation, and as such, greater attention must be paid to empowering them socially, economically and politically.
While recognizing great women in Africa who have contributed immensely to nation building and growth of their various countries, Governor Ajimobi also advocated the need to prioritize the education of the girl child.