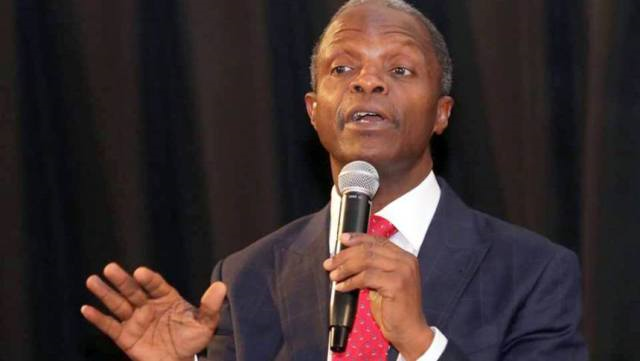 The Vice President, Prof. Yemi Osinbajo, on Wednesday declared open the 2018 edition of the Chattered Institute of Taxation of Nigeria conference with a revelation that the nation had increased its tax net from 14 million in May 2017 to 19 million this year.
Osinbajo, who was the Special Guest of honour at the event, stated that as at December 2017, only 943 Nigerians paid self-assessed taxes of less than N1 million.
He said: “Earlier, I noted that as of May 2017, only 14 million economically active Nigerians pay taxes.
“I am pleased to note that the number is now in excess of 19 million and still growing.
“This means that efforts led by the federal Inland Revenue Service in collaboration with many of the states inland revenue services have already added more than five million new tax payers to the tax base.
“But there is still a lot of work ahead of us; as Nigeria races to catch up with the rest of the world in terms of tax compliance we all have a role to play in this.’’
The Vice President noted that tax issues were not exciting to anyone but added that it was an argument on whether one should pay taxes or enjoy dividend of governance.
According to him, in reality it should not be debated as compliance and good governance should exist side by side as the head and tail of a social contract that binds citizens and government.
He said it was difficult to explain the cynicism displayed by Nigerians about governance and about fulfilling their tax responsibilities.
Osinbajo said: “Governments generally have the nonchalance of fulfilling their own part of the social contract.
“But it is also a fact that when people pay taxes, they are more inclined to hold their governments to account.’’
He noted that it was almost 300 years since “no taxation without representation’’ became the rallying cry for the U.S. covenant and one of the main triggers of their revolution that earned U.S. colonies at the time independence from Great Britain.
Osinbajo noted that Nigeria had experienced the Aba and Abeokuta tax riots incidentally both championed by women.
He said: “The moral is a simple one that when citizens pay their full share of taxes they take more than a passing interest in how they are governed and how public funds are utilized and accounted for.’’
Osinbajo said that government had relied more in the past on oil revenues than on taxation adding that a decline in taxation depicted a decline in government’s accountability and ability to deal with the needs of the people.
He said that poor tax management was one of the issues that increased corruption in the system adding that the fact remained that the tax payer was less tolerant of corruption than another who failed to pay.
He stated that because what government spent was oil money and taxes of few persons a lot of people saw government’s money as belonging to no one.
Osinbajo stated that the present administration was determined to change the state of affairs and also determined to restore the social contract between the government and the citizens by ensuring prudence in public expenditure.
He said: “We have aggressively expanded the implementation of the TSA and IPPIS both designed to ensure that public funds are transparently managed and spent.
“In the process we have succeeded in proving that process reforms are only as good and effective as their implementation.
“The TSA’s unified system of bank account domiciled in the CBN has proved to be far more transparent and cost effective than the old scenario where government agencies maintained thousands of accounts across many commercial banks because of the TSA the federal government realizes monthly saving of at least N4billion which could have gone on commercial bank charges alone.
“The Presidential Initiative on Continuous Audit has also tightened controls on federal payrolls and pension systems elimination tens of thousands of ghost workers and saving us more than N200 billion that would have gone to these ghost workers.’’
Osinbajo stated that such savings were instrumental to the huge government expenditure on infrastructure and human capital development than any previous government in spite of the recession and dwindling earnings.
The Vice President referred to the tax innovation of late Chief Obafemi Awolowo as Premier of the old Western region which enabled the administration to raise money for huge infrastructure, agriculture and free education.
He, however, noted with dismay that the states in the western region besides Lagos did not earn enough taxes to pay salaries and any other major development effort.
He said: “Without federal allocation, most states cannot survive; Lagos state alone takes in as much Internally Generated Revenue as 31 states combined; it tells you how little the other states manage to bring in in IGR.’’
Osinbajo stated that the country’s tax-to- GDP ratio was at six per cent but with the reforms in the tax system might rise to 15 per cent in 2020.
He said the administration had taken steps to curtail tax evasion by multi-national companies as well as prevent citizens from hiding their assets abroad.