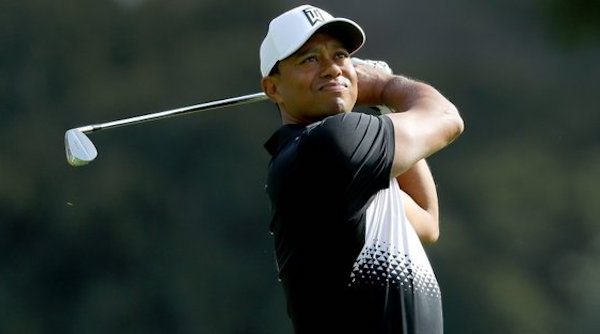 Tiger Woods made his FedExCup playoffs return on Thursday after a five-year absence.
However, he shot a mediocre level-par 71 in the first round of The Northern Trust to sit five shots behind the clubhouse leaders in Paramus, New Jersey.
The former world number one mixed two birdies with two bogeys at Ridgewood Country Club where Americans Kevin Tway and Jamie Lovemark were in the clubhouse at five under.
It was Woods’ first start since a runner-up finish at the PGA Championship.
Despite a soggy course and a calm morning that yielded plenty of low scores, Woods was unable to take advantage.
Woods, who started on the back nine, picked up his first stroke with a birdie at the par-five 17th where his third shot from 30 yards out rolled just past the hole.
The 14-time major champion, who has enjoyed an encouraging return to competition this year after spinal fusion surgery in 2017, mixed two bogeys with a birdie over his closing nine holes.
Defending Northern Trust champion and world number one, Dustin Johnson (67), started on the back nine and was one-shot off the clubhouse lead despite a triple-bogey eight at the par-five 17th.
Brooks Koepka, who won two major titles this year, was also one shot off the pace along with a handful of players, including Japan’s Hideki Matsuyama and England’s Tommy Fleetwood.
Justin Thomas, who won last year’s $10 million bonus as the FedExCup champion, carded a two-under 69.
The top 125 players in the FedExCup standings were eligible for the first of four playoff events that culminate in a 30-player field for the September 20-23 Tour Championship in Atlanta.