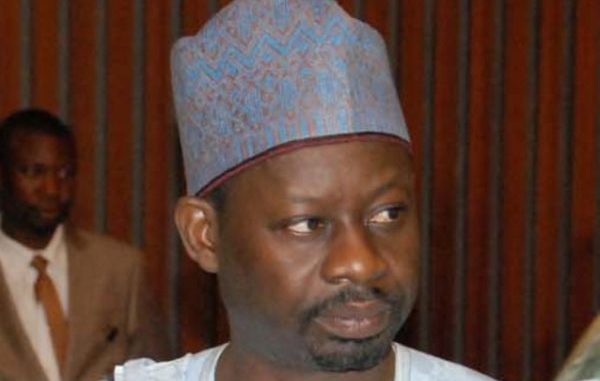 ????????????????????????????????????
Share
Facebook Twitter LinkedIn Pinterest Email
President Muhammadu Buhari has congratulated Governpr Ibrahim Dankwambo of Gombe State over the wedding of his second son, Khalifa, and his wife, Anisa Ali.
Buhari offered the wishes at the dinner party in Gombe on Saturday.
The President, who was represented by the Minister of Environment, Alhaji Suleiman Hassan, prayed for everlasting marriage and good health.
He called on the couple to emulate their parents for a successful married life to enable them to witness the wedding of their sons and daughters.
He also advised them to always exercise patience with one another for peaceful life.
In his remarks, Dankwambo thanked the President for sending a representative, saying that he did not expect the gesture.
He also thanked the governors, their wives and all that attended the ceremony and prayed for God to reward them.
Dankwambo thanked God for the successful marriage and prayed to God to support the couple and sustain the relationship for them to witness a day for the wedding of their children.
He further thanked the people of the state for their hospitality and assured Nigerians to continue working for the development of the state till the end of his tenure.
The dinner party had entertainers from within and outside the country.
Anisa Ali Ibrahim Dankwambo Muhammadu Buhari Suleiman Hassan
Share. Facebook Twitter Pinterest LinkedIn Tumblr Email